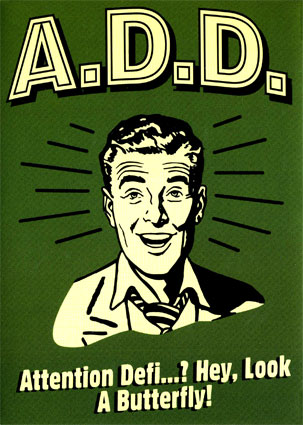 Instead of taking one or two tasks from start to completion and taking pride in doing it, they bounce around with 7 (or 70) different “amazing” ideas and never do any of them.

They end up giving into their lizard brain and having 5 half-finished projects and nothing to show for it.

Of course not everything you do in life will be an amazing adrenaline rush that will blow your mind, but that doesn’t mean at least some of it can. And, it doesn’t mean that you have to subject yourself to mind-numbing work that you can’t stand and have to distract yourself in order to “do it.”

If Everyone Is ADD…

If everyone is special, then no one is. – Ayn Rand, The Incredibles

If we’re all special, then no one is. If everyone claims ADD, then I would argue that no one really has a disorder (i.e. an irregularity). I think it’s called being easily distracted and it’s a human condition, not a disorder.

I talk to a lot of people every day and it’s amazing how many people claim ADD. Because it’s considered a “disorder”, the fact that they can’t concentrate isn’t their fault and they’re officially free of responsibility for their actions (or inability to take action).

But I have so many ideas!

I have a hundreds and thousands of ideas. I’ve got a notepad full of things I want to do, business ideas I want to start, pieces I want to write, and places I want to go (and you thought that the impossible list was long). If I tried to focus on them all at once, my mind might explode and I wouldn’t actually do any of them. Ideas are great, but they’re just ideas on a piece of paper until you actually do something with them.

Figuring It All Out

Identifying problems is easy. People do it all the time. It’s called complaining. It’s harder to actually solve those problems. So how do you figure out how to turn those 1000s of ideas into actual actions?

Here’s 7 questions to ask yourself to help you narrow your focus and start figuring it all out:

Once you ask yourself those questions, start prioritizing the projects you actually want to do, preferably start with the ones you can start on TODAY. Don’t be too tied to the projects either. If something doesn’t work out like you expected, move on to the next thing on your list.