You are here: Home / Hacks / A Little Bit Crazy 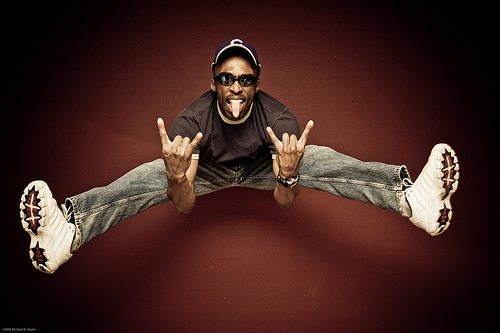 Growing up, my Dad always told me that when I was a kid, I would look at my parents and my family and say, “I’m different than you guys.”

I’m fine with that now (but it took me a long time to get there).

It’s odd that we make such a big deal out of being “crazy.” We’re so accustomed to not standing out that it gets a little ridiculous sometimes and life becomes a race to assimilate rather than becoming the only thing the world needs you to be – yourself.

Be yourself, everyone else is already taken – Oscar Wilde

A few years back, I was in Spain with a group from college and vividly remember standing out. I was specifically trying to capture a certain set of photos. When we’d visit a noteworthy place, almost everybody stood up, and took a photo at eye level, exactly how they saw the scene in their minds. But, that wasn’t my goal. I wanted to capture something different. So I would get down on my knees or lie down to take a photo. I’d set up a tripod and sit for 30 seconds to a minute to take a time lapse shot or shoot something with a long exposure. People would go on ahead without me or get annoyed I was setting up in the middle of the street, but I did it anyways because I knew what I wanted a great photo more than I wanted to look normal.

The result: I had the best photos of the group (in my humble opinion). Not because I was an especially great photographer or anything, but because they were different.  While everyone else set themselves up to capture the same thing everyone else saw, I would actively put myself in a places where I saw different stuff than everyone else and then capture that. But, I had to put up with odd looks, annoying questions and some icy stares from other people around me in order to get there.

Vic Magary seems a little nuts to me. I sit back and read his blog and think to myself, “this guy is nuts.” Then I wonder to myself, “is he really tougher than you Joel?”

He probably is, but I convince myself he isn’t and push myself to get off my computer, out the door and go try to do 30 pull-ups on a clothesline pole.

Nobody pays attention to the mundane.

If you’re going about life, trying to fit in and never make a scene. You can live a pretty good life. It’s fairly safe and nobody will ask too many questions. But there’s no adventure involved.

And when you never take risks, it’s really hard to get better.

A Look Inside My Head

I get a lot of emails asking me how I do it. How do I do the the impossible? As if, it were somehow easier for me than everyone else. Here’s the disappointing answer: It’s not. I’m not special. I deal with the same emotions, and head junk as every single one of you.

The first time I worked out in a park I was nervous as heck. Steve and I went took a lunch break in Portland and went to a random playground filled with people laying out and families with children at the playground.

I remember going with Steve and him telling me, “Okay, do 100 jumping jacks”

So I started doing jumping jacks. In the middle of a fairly crowded park. With families. And children who point.

And people started to stare. Small children cocked their heads at me, the way a dog turns it’s head sideways in a moment of confusion as if to wonder:

Seriously dude, who does jumping jacks at a park and is over 10 years old?

The workout progressed to us doing pull-ups, dips, and multiple types of awkward push-ups and even more awkward one legged squats. I hadn’t worked out in a while and it was kicking my butt. I was losing my balance, looking stupid and generally feeling like an absolute idiot. Even if I was doing this in a dark room with the lights off, I would have felt dumb, but no, this was in front of a captive audience of women, children and with their staring, pointing, laughing, I was sure of it. And if I couldn’t see them physically doing it, they were definitely making fun of me in their minds.

But I stuck through it, and finished. Dripping with sweat, muscles aching. Finished. I might have looked stupid, but I felt stronger.

I liked that feeling of strength. Not only of physical strength, but also of the “It-doesn’t-matter-what-anyone-else-thinks” variety. As I’ve kept the park workouts up at a place about a half mile from my house, I’ve had people ask me lots of weird questions.

My favorite was a little girl that came up to me while I was doing pull-ups on a swingset. She asked me, “Are you taking it down?” as if the only possible explanation for my unusual behavior was that I was personally taking apart her favorite swingset one piece at a time, starting with the top bar.

Other interactions aren’t as nice. Some people laugh. Some people whisper under their breath. Some people walk faster when they see as if they’re scared that some shirtless man is working out on a playground and going to come after them if they look at me funny. I’ve even had people go out of their way to explain to me that there’s a gym just a couple miles down the road and then stare in confusion as I try to explain to them the fact that I don’t really want a gym right now and that the park works just fine for me (plus it’s free!). It’s fun to see a people’s minds implode sometime :).

When it comes right down to it you need to ask yourself why you really care.

Who cares if they think you’re crazy?

Why does it even matter?

Well feel stupid. Then do 25 push-ups and feel a stronger.

Why does it matter? Do 10 pull-ups

Someone asked me what the rules for the 100 pushup contest were. Can you stop? Can you stick your butt in the air? What’s considered okay and what do they consider cheating?

I don’t care what they think. It doesn’t matter.

I finished the 100 pushup challenge purple, panting and sweating like you wouldn’t believe. But I finished it. In fact, I did 110 pushups. I had people tell me x was wrong and I didn’t do y correctly. I didn’t really care.

I can look myself in the mirror and tell myself I finished that mission with a clear conscience.

That’s the real test of if you did it right. If you cheated yourself, you’ll know it and then, it really doesn’t matter if other people approve or not. If you can’t look yourself in the mirror, nobody else’s opinion is worth the air they’re wasting to express it.

If you’re worried about what others think, try re-framing it and use your own conscience as a metric. After all, you’re the one that has to live with yourself, not others.

Only those who attempt the absurd…will achieve the impossible. – M.C. Escher

I’m  getting to the point where being crazy is getting to be sort of fun now. I’m enjoying being a little bit crazy. Doing stuff other people consider insane. Impossible even. I enjoy the stares. I enjoy the laughing. Because, when they laugh at me for being different, I can laugh right back at them for being the same.

Two thirds of this country is overweight and out of shape. Look at “everybody else”…do you really want to be like them?

Do you really want to be like everybody else? No? Then why are you afraid to do what they don’t approve of?

Maybe I’m stupid. Maybe I’m crazy. I don’t really care what you call it. I’m having a lot of fun doing it.