You are here: Home / Fitness / Are You Really Going To Let That Stop You? 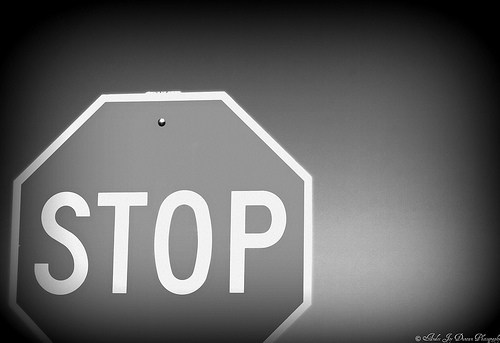 I’m working on some pretty big things behind the scenes lately. They’re not quite ready to share, but sometimes when working on projects, I start and stop and start again, but little things come up that threaten to stop them from happening. This is one of those little things.

The site keeps getting bigger and bigger and a few months back I began brainstorming an idea for scaling the site and it’s functions. I had a specific idea in mind to reach more people and was really pumped about it.

I had the concept mapped out, the design mocked up and the people lined up to do the work.

And then I ran into an insurmountable hurdle…The biggest death knell to any online project.

The domain name was taken.

Not only that, on top of that, it didn’t expire for a whole year!

I stopped dead in my tracks.

It was going to be a year until I could do anything with my great, fantastical, mindblowing, impossible idea. Suck, suck, suck suck. O well, I guess that’s the end of that. I was just about ready to package up all the work I had done up to this point and mail it back to myself in a year until my alter ego slapped me upside the face:

ARE YOU REALLY GOING TO LET THAT STOP YOU?

Are you really going to let that stop you? A domain name. A freaking domain name? If your idea is as good as you think it is, you should be able to do it on www.thisdomainsucks.com and it wouldn’t matter as long as you build it. Stop whining about how someone bought a $7 domain name before you. They didn’t even take your idea. They’re just putzing around doing nothing with it. Why are you letting them stop you?  Do what you want, build it and worry about the domain name later.

They all seemed to do okay.

You know why? They didn’t care about the domain as much as they cared about starting.

So I decided to check. Sure enough .Net and .Org were available. Immediately, my whining kicking in:

But I don’t WANNNTT a .Net or .Org. They’re not as cool as the others. I want a .Com. People will like it better. It will be so much more popular if it’s a .Com

Once again my alter ego jumped in and slapped me in the face:

If you don’t want to do the work, don’t do the work. But please stop complaining.

Leo built the best blog on the internet on a ZenHabits DOT NET. JD was one of the top 25 blogs this year on GetRichSlowly DOT ORG. Your domain name matters a whole lot less than your willingness to do the hard work day after day.

I needed to face the facts. The domain name might be 1% of the project’s success – maybe less. The hard work it was going to be responsible for at least 99% of the projects success. I was using the 1%, as an excuse  not to do the 99%. I didn’t want to take the blame for letting the 1% stop me, so I was making it out to be some impossible task that would put a stop to the whole project when it was barely an obstacle to begin with.

This happens a ton. The things that stop up sometimes are pretty laughable.

You probably have something amazing in your head waiting for you to do it. But something so small it’s laughable is stopping you from doing it. Not because it’s impossible to solve (it’s actually probably pretty easy to work around), but because you’re scared to do the work.

Let the squatters take their .Com. Let the people setting up trip lines, try and trip you up. There’s going to be a ton of little stuff that tries to stop you before you even start. If you’re going to build something, build it. Build it in spite of everything wanting you to fail and just see if it works. And if you want to give up, then give up. But don’t think for a second that you did so because what you were after was truly impossible.

As for me, I’m going to keep building and I’m not going to let the 1% stop me.

Race Update: I’m running the Sylvania Triathlon with Johnny B Truant this Sunday in Sylvania, OH. It’s my first olympic distance of the year and should be a good metric as I get ready for Chicago in a couple weeks and the Miami Half-Ironman later this fall. Should be fun :).