You are here: Home / Adventures / Running Back To Back Marathons

A few years ago, I had never run more than 3 miles.

After a few triathlons and some other short distance races, I ended up running my first marathon – barefoot.

When I finished that, I basically told myself I never want to do that again – I was done running marathons – at least that’s what I thought…

Sometime after my legs had forgotten how much pain they experienced during my first marathon, the idea of running an ultra got planted in my mind. I pushed that thought away and told myself that I didn’t need to do it…and I thought that would be the end of it.

But it wouldn’t just go away…and it kept coming back again and again.

I don’t particularly enjoy running and I’m certainly not the fastest on the course, but I enjoy the challenge of pushing myself to go farther and do stuff I haven’t done before…I think I have a problem…

Finally, I decided if I was going to do it, and realized that I might as well put it all to good use and decided to run a 50k in order to raise awareness and help build an #impossible school in Guatemala (We’re a little past 50% of our goal as a community. If you’d still like to be a part of the campaign, you can find out more info here).

So, I kicked off the training a few months ago and I’ve been slowly adding miles to my long runs every weekend which somehow culminated in me running back to back marathons in consecutive weeks – yup, I surprised myself too.

Why Back To Back Marathons?

My simple answer is why not?

It certainly seemed to be the best option given my training schedule.

See, a big part of running is dealing with the boredom. While some might be especially fast, if you’re not, it can take a little while to get from point A to point B. So when my training schedule said I was supposed to run 22 miles one week and 24 the next, I wasn’t terribly excited about the prospect of spending 3+ hours running around Chicago on my own as the temperatures began to drop.

While training runs aren’t always fun, races aren’t too bad. There’s water stations, usually a few spectators – no matter how sparse – a timed result and food at the finish line. I realized I’d be much more excited, motivated and interested in running a marathon than I would be to run 22 or 24 miles for “training.”

I should note, that this is probably not the smartest way to choose races and most running coaches would probably hate me, but it seemed more interesting to me, so I decided to do it.

First up two weekends ago was the Prairie State Marathon.

I literally decided the night before the race that I was going to do it (like I said, most running coaches would hate me).

But, I realized I probably wouldn’t run the 22 miles on my own given the upcoming weather conditions. Either way, I showed up early, paid my $90, got my bib number and started running. 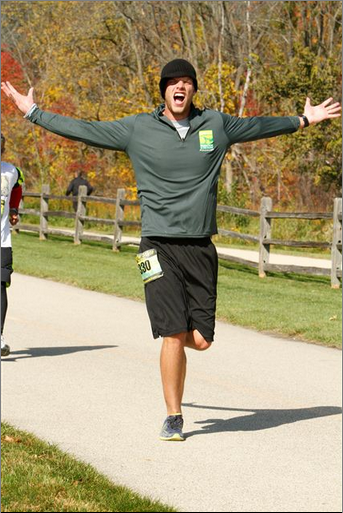 Coming back, you run right by the finish line as you pass the 18 mile marker and head out for another 4 mile out and back on the south side of the course.

It was not amusing.

After being teased by the finish line a little less than 2/3rds trhough the race, the four mile out and back weaved through a marshy/swamp area that seemed to be endless cruel joke where the race director sent you to run for eternity – never to return. Again. Not amusing.

After what seemed to be forever, I finally hit the turnaround and made my way back the same 4 miles to the finish line. It wasn’t pretty but I finished.

Over the next 7 days, I took lots of ice baths, ate bananas and rested. My legs hurt.

The bridge marathon was this past Saturday. After taking the past 7 days off, my legs were feeling better and I figured I would have no problem. We showed up early and somehow it got darker between the time we left and the time we got there – I have no idea how that happened.

When we showed up, I thought maybe 10 people were going to run the race – there was practically no one there. About 15 minutes before the race started a bus with about 50 people showed up.

Whatever the final total was, it was under 100 athletes – easily the smallest race I’ve ever been a part of. Seriously, this was the start line. 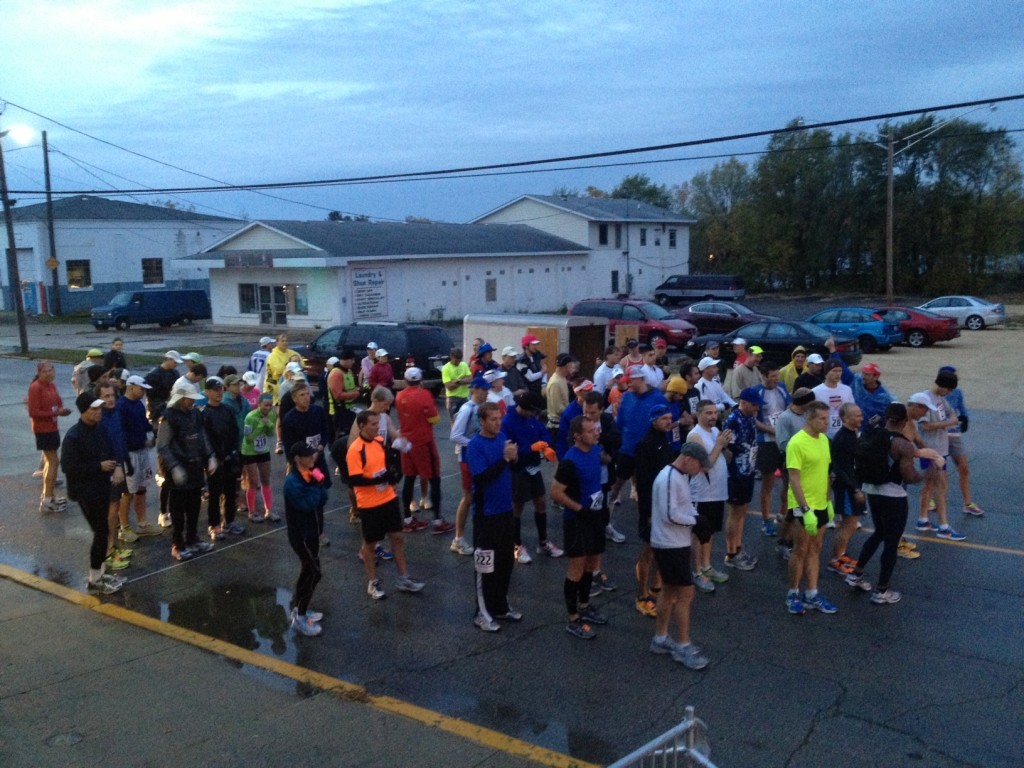 Stone Bridge is advertised as a flat course, but there were definitely hills – especially the first 12 miles. I realized about 6 miles in that I was going to feel the effects of the previous week’s race. Around mile 14, my legs decided to let me know how tired they were and my quads were just screaming at me. There were a few time where I had to stop and stretch them out, but I just had to keep going.

After I hit 20 miles, I told myself – It’s all over in less than an hour. You just have to make it 60 minutes. And I did. Again, I finished – it wasn’t really pretty – but I finished.

Back to Back Marathons: DONE.

Both of my times were well over 4 hours which was fine with me – considering they were training runs more than anything (and believe me: that sounds as ridiculous to me as it does to you). I’m taking this week easy, filling it with ice baths, stretching and (unfortunately), probably more ice baths.

Next weekend I’ll take it easy with a half-marathon followed by the 50k ultra on the 27th. After that, I’m not sure when my next big race will be. I’m not sure I’ll need to do any more runing after this – but then again, I’ve said that before.