You are here: Home / Adventures / Chicago Triathlon 2010 [The Race That Wasn’t Meant To Be Timed]

To those of you wondering – Yes, I’m alive and yes, I finished =). The biggest triathlon in the world. Done. One more thing off the Impossible List.

Saturday evening I headed downtown for the Triathlon Expo. An hour of chaos and a bag full free energy bars, I met up with Mark Lawrence, Nina Yau & Brandon James for our own mini-Chicago blogger meet-up. We had a nice pre-race dinner at a small Peruvian restaurant complete with chicken and plantains [along with a full-fledged debate over whether or not I look like Tim Ferriss or not] before heading back to Mark’s place where we ended up hanging out for a bit, until I decided to crash around 10pm and Mark & his buddies decided to go out.

I woke up at 3:15 and got my stuff ready. Mark gave me a call at 3:30 and still wasn’t back [the guy likes to have fun]. He came back to the house and dropped me off at the race at 4am and I headed to the transition area to set up my bike & get ready. After getting all-set up I spent the next 4 hours warming up, fighting off butterflies, and stretching. Sometime in between, I decided to shoot this video.

My wave finally started lining up for the swim portion around 8:30. We got put into the water at 8:46 and and 8:48 the chaos started. I’m was expecting the usual kicking and grabbing, but this was much more intense. Within the first minute, somebody had kicked my hand so hard, they broke my watch.

It still technically worked but it detached half of the watch from the wrist band so it was flopping around making it near impossible for to read it while swimming without stopping mid-swim and using my other hand to look at it.I took the time to do this as I passed the half-way marker and was happy to see that I was at about 18 minutes – right on pace with my expected swim time. I kept going strong but some of the faster swimmers from the wave behind me were beginning to catch up. I could feel them on my heels [literally] and started kicking a little bit more so I could get out of their way. They responded to my kicking with some grabbing and at one point, someone grabbed the band holding my timing chip and ripped it right off! I felt it go and immediately grasped at my ankle, but my timing chip was already at the bottom of Lake Michigan.

I got out of the water and fiddled with my watch to glance at the time. Somewhere around the 35 minute mark. Not too bad. I glanced down at my ankle to check my ankle for my timing chip. Yup, definitely somewhere at the bottom of Lake Michigan. I shook my head and tried to clear it as I started the 1/4 mile jog towards the transition area.

Somehow, out of the 8,000 bikes or so, I actually managed to find my bike fairly easily and managed to get on my bike relatively quickly [although i don’t actually know exactly what “quickly” means since both of my timing devices were out of commission]. As I started pedaling down Lake Shore Drive, I looked down at my speedometer as I got up to speed. After a quick double take, I realized that my speedometer said I was going approximately 0mph. Apparently someone had bumped my bike’s wheel during the transition, and messed up the device on the wheel that relays the speed information.to the timer.

I would have tried to figure out & fix the speedometer, but I was in a race and I was too focused on avoiding the potholes that apparently everyone was hitting [I passed at least 15 cyclists on the side of the road waiting for the sweep car after having their tires blow out]. The course was two loops on Lake Shore Drive so I tried to gauge my time on my watch every time we turned around. I did each one-way distance in approximately 2o minutes and finished the bike portion [to my best guess] in about 1 hour and 20 minutes because I remember pulling into the transition area at about the 2 hour mark. Grateful, I scraped through the course without blowing a tire, I hopped off my bike, dropped it off in the transition area and started jogging south towards the run-out section.

This was by far the most brutal part of the race. I remember thinking as I left the second transition, that I would  be planning on finishing around the 3 hour mark. All I would have to do is run 6 miles at a 10 minutes pace. Easy, right?

I was wrong. So wrong.

I started running and I don’t know what happened, but I was gassed. On top of that, after the first 1/2 mile, we ended up running on the sidewalk along Lake Michigan down past the Shedd Aquarium, Soldier Field and McCormick Place. If you’re not familiar with Chicago, there’s no shade of any sort on this route. The temperature was pushing 90, without a cloud in sight, and it was getting close to 11 and I was running straight into the sun.

It was so hot.

I started plodding away at the course and it seemed to take forever. I don’t know at what point I realized my pace was so absolutely slow, but I remember somewhere around the two mile marker, I thought to myself

6 miles isn’t that far for me. I’ve done it plenty of times before, but at that moment it really seemed impossible. I kept looking over at Lake Michigan since we were running right next to it the whole time and just kept wishing I could go jump in and swim my way back to the finish line. The heat was really getting to me. At some point, I just went on autopilot. I stopped worrying about my pace and just focused on finishing.

As we made the turn a little past the halfway mark of the course, I tried to pick it up, but it was all I had to just keep running. Somehow I managed to convince myself not to walk any of the race except for the water stations where I tried the interesting maneuver to get the water in the cup into my mouth [a surprisingly challenging task with my current level of energy]. Somewhere near the 4th or 5th water station they ran out of water so I had to stop at the drinking fountains along the path to get hydrated. As we got to the last 2 miles, people started to populate the race-way and yell out “encouraging” statements. As much as I appreciated the attempt at encouragement, I swear they were lying. They kept shouting:

After the first few announcements of distances, it was fairly obvious none of them knew precisely how far was actually left. They were just poor [although well-intentioned] guesses. I started to block them out and just focus on going forward. I finally turned the last curve and saw the finish line. I tried to sprint the last part, but I really had nothing left. I crossed the finished line [sans timing devices] and all I could think was

Holy crap, I just did that 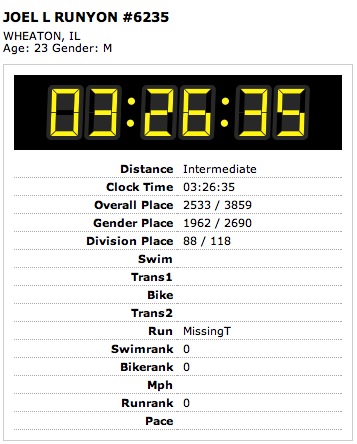 I spent probably 30 minutes alternating dumping water on my head, panting in front of one of the industrial fans they had set up and slopping cold towels over my head in a futile attempt to cool down. I was so hot. I don’t know if I’ve ever been so hot in my entire life.

I had passed a few ambulances on the run segment, but as I looked around the finish line and saw a number of people on stretchers with IVs in their arms, I thought to myself:

There are way too many ambulances here

I went back over to the fan, leaned up against the guard rail and put my head down as I let the fan cool me off. After a minute or so I had an older guy tap me on the shoulder

I’ll be all right…I think.

I finally cooled down enough to walk out of the finish line and stumble over to some shade and lie down in the shade.

I took the train back out to the suburbs, got home, took a shower and crawled in bed at 4pm. I woke up at 6am Monday [a 14 hour post-race nap!] and I spent the rest of the day Monday recovering from the race. I’m fairly sure I had at least a mild case of heat exhaustion. I woke up and was ridiculously hot and dizzy. I spent the next 6 hours alternating between drinking gatorade and water, taking cold showers and putting ice on my forehead. It was not a good day. Sometime around noon, I managed to start walking around without getting constant dizzy spells and by 6pm or so, I was doing okay and even manged to drive back to Indy last night.

For the first time in a while, I don’t have any races on the immediate horizon. I’m thinking that I want to do a 10k and a half-marathon before the end of the year, so I’m looking at a few different ones coming up in October and November. The tri season is coming to a close, but I think I still may be able to fit one more in somewhere before it’s done for good. [If you know of a good one, let me know]. The next few weeks, I’ll probably take it pretty easy on the workouts and give myself a chance to recover. Turns out, these impossible things end up consuming quite a bit of energy :).

Apology #1: I’m sorry this update’s taken so long to post, I know a lot of you have been asking about the results and I appreciate the interest & support so much, you have no idea how much it means to me but I was in no shape for writing the last few days, so I got this up as soon as I could.