You are here: Home / Hacks / Do Something Impossible Or Go Home 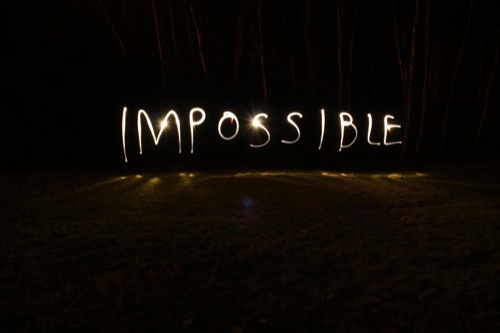 If you’re already doing something impossible, that’s great – I’m ecstatic you’re here. this isn’t for you. If you’re not, this might make you angry – you need to hear it anyways. Fair warning.

I only want people around me who can do the impossible. – Elizabeth Arden

This place is a place for action.

Not for wishing. Not for talking. Acting. Doing. Finishing.

If you want talk, go to 99% of the rest of the world. There’s a lot of noise. Everyone wants to talk, talk, talk, talk, and talk some more but very people actually follow through. There are enough places in the world that that happens. This is different. If you don’t want to do something impossible, you can go home. We don’t need any more talkers here.

Do or do not, there is no try. – A Wise Green Jedi

The only difference between people who do impossible things and people who don’t, are the people who do impossible things – do stuff. That’s it. They do stuff. That’s the secret sauce. They don’t waste their time trying. They just do it. The three words that guarantee failure are “I will try.” So if you want to do something, stop trying and just do it already. As soon as you approach something as “trying”, you’ve already given yourself permission to fail because “you tried”. So if you’re going to do something, just do it.

You have no excuse not to start now.

Don’t even bother reading the rest of this post. If you’re reading this as a procrastination tool, stop it and go do something.

What This Blog Isn’t

I want to clear some things up.

This blog isn’t Oprah’s book club, it’s not a campfire and we’re not sitting around singing kum bah yah. If you want self help, here’s the only post you ever need. This is about doing things. Hard things. Impossible things. If you want to do something, here’s how to do it.

A new revolutionary method for achieving your goals! Step 1: Decide what you’re going to do. Step 2: Do it.

That’s all it takes. Every significant step forward in history started with someone who decided to do something and then went and did it.

It’s not that I don’t care about you – I care too much. I just couldn’t give a crap about your excuses.

The truth is you’re better than you’re letting yourself be right now. Whatever excuse you’re holding onto is crap and deep down you know it. The angrier that makes you, the truer it is.

You’ve been lied to. You’re not SPECIAL. Your circumstances aren’t that different. You’re exactly like everybody else on this planet.

If you want to do something impossible, stop complaining that it’s “hard” (you should have expected that) and explaining why you “don’t feel like it.” With all the energy you spend coming up with excuses you could be out there doing something remarkable instead.

You’re not different. You’re not special. You’re a normal freaking human being. And that’s awesome – because normal human beings are the ones who change history. It’s time to start acting like it.

I Won’t Be Writing About Rainbows

If you want to make a change and don’t know how to do everything at once, that’s fine, start on something. But if you’re sitting around, snorting inspirational cocaine telling yourself you’ll change everything starting tomorrow, you can leave.

“People say they have all kinds of priorities, but to get the real answers, just look at what they actually do.” [email protected]kelly_newsome

Doing the impossible and telling a great story isn’t always easy. It’s not always nice and pretty. It’s not gonna be fun all the time. It’s not sunshine, rainbows and unicorns. But it’s totally worth it…if you decide that it is.

The Integral Importance of Action

Your decision to act is the single most important decision you can make. Instead of allowing yourself to be a victim of circumstances, you turn into a conquerer of whatever situation you find yourself in. You can have all the goals in the world but if you never do anything with them, so what?

You have more goals than anyone? That’s neat. Are you actually doing any of them?

That’s why most bucket lists are junk. People take one time to write out all their dreams and think about them. And those dreams feel good, like really good, but they never make the changes they need to make to actually DO THEM and the bucket list sits on their computer or wall collecting dust while the person who wrote it basks in false sense that they’ve accomplished something. The impossible list is not a bucket list. It’s a constant reminder to live a better story in the present by doing something impossible rather than living complacently.

Why Do Something Impossible?

I’m not here to beat my chest and yell about triathlons. It’s not about running long distances and one-upping everyone else. I honestly don’t really care what you impossible things do. If you want to run a triathlon, sign up for one and start training already. If you want to climb Mount Everest, research the crap out of it, fly to Nepal and climb the stupid thing. If you want to knit, just start knitting. I don’t care what you do, but do something because when you do something you thought was impossible, you fundamentally change.

In order for you to actually do something impossible, you have to become a very different person than who you are right now attempting the safe, non-dangerous things you’ve trained yourself to attempt your whole life. As you shift yourself into a realm you’re uncomfortable in, you force yourself into the unknown, begin experiencing conflict and you start telling a better story with your life.

Do what you can, with what you have, where you are. – Teddy Roosevelt

It’s not the things that you do that matter – it’s that you do them, and the journey that happens when you decide to do them. But to do that you have to pick something and actually do it.

Once you do something you thought was impossible, you realize that limits are imaginary. You don’t have to play everyone else’s game anymore. You can make up your own rules. 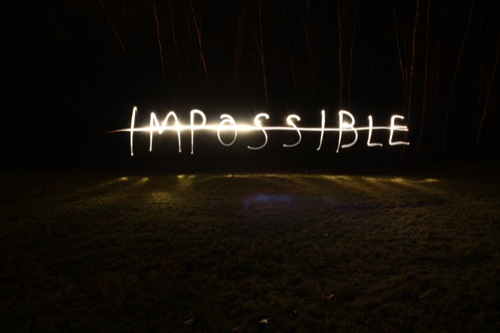 I appreciate every single person that takes time to read something I’ve written, and I’m going to continue to be more and more specific with blueprints to help you get started doing something, but I’m done enabling inaction.

Do something Impossible, tell a great story and  change your life (Here are a few ways how). Otherwise, go home.

If you want to get started, download the impossible manifesto. It’s free (pdf is available here). Then go do something.