You are here: Home / Fitness / This Isn’t Even My Final Form!

There’s always a gap in everything you do: the gap between who you are currently are and what you’ll one day be capable of. That effing gap. It’s the worst thing in the world. You want to cross it and just get it over with, but that’s not how it works. You have to take it step by step. Effing gap.

Ira Glass has a few words to say on the gap when it comes to creative work.

Where you currently are is not where you’re destined to stay. You don’t have to keep staring at that gap. You can bridge it. And there’s one phrase that will keep you from having that gap drive you crazy while you do:

This isn’t even my final form.

The phrase is a Dragonball Z reference. Frieza is essentially a transforming character who wows his opponents through his transformations. While they’re all gasping at his second or third transformation, he laughs and taunts them, saying, “You fool, this isn’t even my final form!” before transforming himself yet again. (Yes, I know this is super nerdy – Steve would be proud). 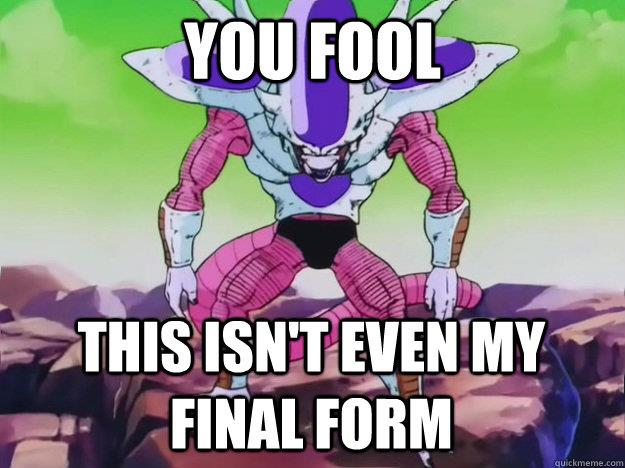 The internet has turned this into a popular meme (you can read the full details here), but the message is the same: this is not my final form – there’s more to come.

You can be like Frieza. When people gasp at your transformation, you can smile to yourself and know the truth: this isn’t your final form.

How To Keep Transforming

If you want to take things to the next level, you have to do a few things.

If you’re doing anything worthwhile, you’ll probably get a few haters, but you might also get a few compliments. At first these might seem strange (are they mocking you?). But, as crazy as it sounds, sometimes people actually make sincere compliments or are impressed.

If/when that happens, take the compliment.

Don’t be a jerk. Take the compliment. You’re not being humble by deflecting it and pretending it’s not true. You can’t continue to grow unless you take an honest look at where you’re at.

This can be the hardest thing to do starting out, especially when you’re looking at that stupid, stupid gap, but take the compliment anyway.

Okay, that’s enough. Snap out of it. Stop basking in your own glory. You’re not done (remember that gap?). Well, it’s not gonna fix itself. You gotta start.

You’ll want to make a lot excuses. I can hear them already: “but…but…but…but…” No.

No buts. Start or shut up.

You have to be willing to experiment to grow. Try something new. Try even newer things still.

Only by trying new things can you evolve. Which brings us to the next point:

Note: More than anything, this is the one thing I keep coming back to. Experiment constantly.

Nothing is set in stone. As soon as you think you’ve figured something out, you realize you’ve only just begun. Keep experimenting. Evolution happens when you try something and it works. Then you do it more and more and more until it turns into something else.

You’ve run your first marathon. Cool. What’s next? There had better be something next, otherwise it’s all downhill from here…

You started a blog. Neat. What’s next? What will you do with that? What’s your next evolution?

You Have Not Yet Arrived

It’s good to remember that, as much as you might like to think you’ve arrived, you have not…yet. It’s tempting to think that you’ve made it and slide into a bed of comfort. Being on the receiving end of a load of compliments can make that option even more tempting so, next time someone compliments your current form, graciously accept the complement but remind yourself: this isn’t even my final form.

There’s much, much more to come.

Oh, and in case you wanted to see all of Frieza’s transformations (nerd), you can see the video below: