The Patagonia International Marathon was an absolutely astounding 63km/39.4 mile race. And we’ve raised almost $10,000 so far. Amazing! Thanks to everyone who has joined the cause and supported 777 in one way or another. If you still want to get involved, there’s good news. You can!

The fastest way to help is by taking part in The $25 Challenge. Do that here.

As for Patagonia, it’s absolutely breathtaking. It’s one of the most beautiful places I’ve ever been to. To give you an idea of what I’m having to deal with, take a look at these photos (and follow me on Instagram here).

So, yeah. You could say I’m having a rough time finding places that are photo worthy. 🙂

A recap of the race is coming up soon (along with a video and a donation update), but I want to talk about something that was on my mind as I covered those forty miles on Saturday.

A couple of weeks ago in San Diego, I went running with one of my more experienced ultra runner friends. As we took it fairly easy, we had time to chat. We both mentioned that one of the things we love about the ultra community is that you have to be a little insane to even get to the starting line. The races are long and are as much a test of endurance as they are a test of speed.

Because of that, a community has developed around the idea of “getting out there” rather than beating each other to death. This community is therefore much more about the act of personally challenging yourself than it is to always come in first place.

As we talked about that, Sante said something that’s going to stick with me for a long time:

“That’s the thing about ultras. We’re all out here on our limit. It doesn’t matter really how fast you go. If you’re out there on your limit, that’s what it’s all about.” 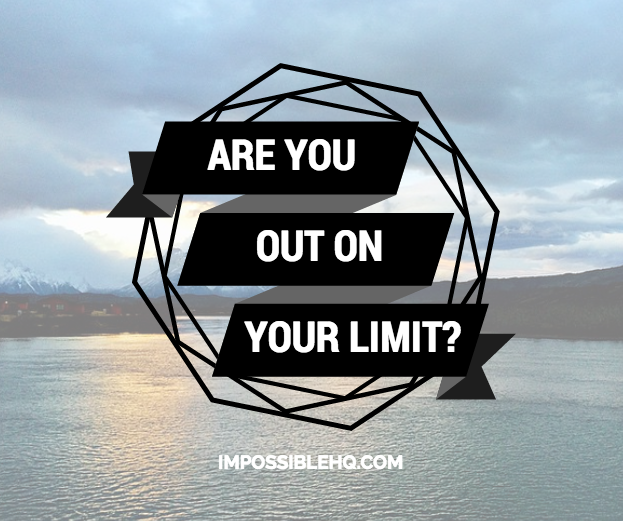 At that point, I don’t think I’d shared anything about IMPOSSIBLE, 777, or any of my other projects, but the mentality Sante was talking about is exactly the mentality that IMPOSSIBLE was designed to create. It doesn’t matter where you’re at or what you’re capable of, as long as you’re pushing for something more. Accepting whatever your current limits are is not acceptable. You have to keep going – pushing yourself out to the razor edge of your limit (and then keep going).

“Seriously, if you always put limits on what you can do, physical or anything else, it’ll spread over into the rest of your life. It’ll spread into your work, into your morality, into your entire being. There are no limits. There are plateaus, but you must not stay there, you must go beyond them. If it kills you, it kills you. A man must constantly exceed his level.”

And it’s true. When you’re out there on the road on your own (or wherever you are), it’s not about anyone else. It’s about whether you can look at yourself in the mirror the next day and know that you left it all out there.

At Comrades, I used three mantras throughout the race. In a similar fashion, during this race, I kept thinking “are you out there on your limit?” I asked myself that every couple miles or so. And if the answer didn’t line up with my expectations, I’d adjust my pace.

I think it’s a good question to ask yourself, whether you’re running forty miles or four. Even if you never run a mile in your life, continually asking yourself “are you out there on your limit?”, and being brutally honest with yourself, is a great way to gauge your choices, decisions, and intensity level, especially if you’re focused on moving those limits. (Note: if you’re focused on stagnation, simply aim for comfort).

But if you want to continually push yourself and do something impossible, the next time you set out to do something tough, ask yourself:

Are you out there on your limit?

If not, ask yourself “why not?” and “what do you have to do to get there?”

If you want to push your limits, check out the 777 Project. You can donate here. Here are some more ways to get involved:

Until next time, go do something impossible.