You are here: Home / Adventures / 3 Reasons Why Your Life Story Is Boring And How To Tell A Better One 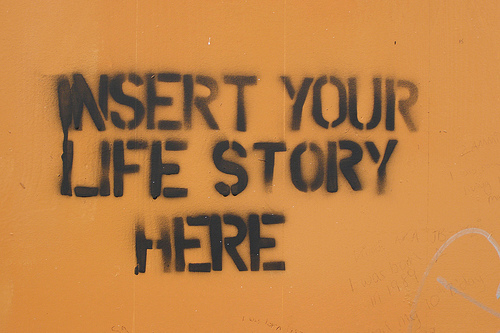 A story involves a person that wants something and is willing to overcome conflict to get it. – Donald Miller

I started this blog because I felt the story I was telling with my life was incredibly boring. I realized that if I had to write the story of my life, no one would read it. So I decided to change it. I made a list, started a blog and started doing some impossible things.

Since, I’ve been able to some pretty cool things, but i still get lots of questions on how to tell a better story, live a more interesting life and doing something impossible when it feels like you’re not doing very much at all and living a pretty mundane story.

If the story you’re telling with your life is boring, there are 3 main reasons why. Here’s how you can fix them and start living a more interesting story today.

You Don’t Know What You Want.

You sit around all day watching other people do cool stuff and you want to do something awesome, but you can’t come up with something. You have no idea what you’d do if you could. You’ve never actually thought about what you actually want.

Nothing seems interesting so why bother. So you sit and watch and live vicariously through others bored out of your mind. No wonder there’s never been a story written about a guy who sits on his butt watching youtube videos of people doing awesome things.

Live vicariously through yourself. Some people are born and know excactly what they’re supposed to do. Throughout the course of human history, this has happened to 11 people (approximately). Everyone else has to work at it.

Work at finding out what you really want? Yes.

It takes some time, but there’s an easy process to figure it out.

Do this. It might take a while, but if you do it enough – you’ll find something that captures your attention and boom you’ve got it.

You Haven’t Tried Something That Really Scares You

You haven’t tried something that you have a very real chance of failing. It’s impossible to have an adventure where there’s no risk involved. Adventure needs uncertainty. Adventure requires risk. Risk means you might fail.

Real adventure is defined best as a journey from which you may not come back alive, and certainly not as the same person. – Yvon Chouinard

I’m not going to pull any punches – failing sucks. It really does. But it seldom sucks as much as you think it will and it sucks way less than never even attempting it in the first place and always wondering “what could have happened?”

I find the most dissatisfied people are the ones who hold themselves back from doing what they really want to because they tell themselves they can’t do it (I know because this was me). Occasionally, people can’t even tell you what they really want to do because it’s so intimidating. They actually do know what they want, they’re just too scared of failing they don’t want to even mention it out loud so they just say “I don’t know.” In order to experience some sort of conflict, some sort of conflict, you have to do something scary enough to invite in risk.

How to Fix This

The worst answer to “fixing” this problem is to be fearless. There’s no such thing – and attempting to do so is pretty much pointless. If you’re doing anything worth doing, there should be an element of fear involved. Fear doesn’t have the final word. Fear’s only effective when it wins out over your courage to do something impossible.

It’s remarkably similar how similar the equations for both boredom and adventure are – there’s really only one small change between the two.

When courage wins out over fear, you’re on an adventure and you’re on your way to telling a great story. When you let fear win out, that’s when boredom, dissatisfaction and unhappiness being to creep in.

Lets fix that. Think of something you want to do.

What’s the next level beyond that?

If you just jumped back a little from the computer, freeze up, eyes get really wide and think to yourself, “There’s no freaking way can I do that.”

Congratulations. You found something that scares you. You should go do it.

You want to add adventure to your story and start living a more interesting life? You have to invite more conflict in, which means taking bigger risks and doing stuff you think is incredibly scary or even impossible. Go do it.

The Wrong Kind of Conflict

I should note that there’s a very dangerous type of conflict you should avoid – manufactured conflict. You familiar with it – made up problems, fake conflict and reality TV. The people that manufacture it often lead such uninteresting lives that they make up problems that have nothing to do with anything whatsoever. They just know that conflict makes a good story whether or not it’s productive.

In most cases, it’s manufactured out of thin air to add drama to an otherwise boring and fairly depressing life. The result is that it’s not only NOT a good story, but it adds nothing to your life. It doesn’t get you closer to want and it’s generally unproductive. Instead of creating fake, manufactured conflict, seek out things that provide productive conflict and get you closer to what you really want.

You know what you want. You’ve tried it…and…you gave up.

It was hard. Most other people would have given up too. You got as far as you could – but it was just too hard. You justify it to yourself.

But you phoned it in. You went home. You quit.

You’re not willing to overcome conflict

Stop being so lazy. Remove the barriers from your life that are keeping you from doing what you really want.

Find something you actually want. Sometimes wires get crossed during the “know what you want” phase and you end up pursuing something that someone else really wants you do.

The Difference Between Quitting & Persevering

If you’re not happy with your life story, there are 3 reasons: