You are here: Home / Adventures / Moderation Is Overrated

“Everything in moderation” is my least favorite phrase on the planet. Admittedly, I have a bit of an extreme personality. When it comes to doing something, I either do nothing, or I go all out. There’s very little middle ground.

I realize everyone is not like me, but I think it’s worth while noting that this concept of moderation has been so engrained in people’s minds that it’s the default “common sense” mindset – which in and of itself, means it should be questioned. 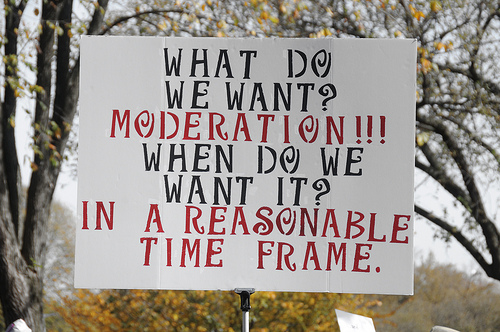 If you’re going to do something – go balls out. Really go after it. If you’ve convinced yourself to be “moderate”, check yourself and make sure it’s not for these reasons:

Moderation is easy. If you go to work out and decide instead of sprints or something intense, you’re going to take it easy and “jog for 10 minutes”, you can go as slow as possible.

If someone questions you on the actual value of the workout you’re doing, you can simply respond, “Oh, I was jogging – it was moderate.”

There’s no room for argument. Even if you suck, you still have  “defensible” argument.

Moderation Happens When You Don’t Know What You Want

If you don’t know what you want, it’s pretty easy to take things easy. If there’s no urgency and no goal to orient your behaviors around. It’s easy to be wishy washy and take whatever comes your way because you’re letting life happen to you.

You haven’t decided that you want X out of life and that you’re going to do whatever it takes to get it – so instead you let things fall as they may and keep ambling along moderately.

“I wasn’t really trying – I was being moderate.”

Being “moderate” makes room for failure. If you were actually honest and went after something as hard as you could and still failed, it hurts a lot more. You might be *gasp* embarrassed.

This is a huge reason: they’re scared of failure.

You’re scared if you actually tried and gave it your all, you’d still fail (and everyone would point and laugh and think you’re stupid).

Far better it is to dare mighty things, to win glorious triumphs even though checkered by failure, than to rank with those poor spirits who neither enjoy nor suffer much because they live in the gray twilight that knows neither victory nor defeat. – Teddy Roosevelt.

(What’s even scarier still – if you go all out – you might actually succeed.)

Moderation is a Cop Out

I believe a meaningful life is about being uncomfortable for long periods of time to create sudden moments of great meaning.

Pain & difficulty are not optional – they’re essential. No good story ever develops without pain & difficulty involved. Don’t try to “cheat” by being moderate. You only cheat yourself.

About the biggest proponent of “moderation’ is the idea that you’ll burn out if you go too hard for too long. Not to mention that extremism is has terrible associations with politics, religion, wars etc.

That’s not an invalid criticism.

However, no one ever talks about the dangers of moderating yourself into a standstill.

In our quest for moderation, that element is often lost. Moderation isn’t a bad thing in and of itself, but becoming so moderate that you don’t have any forward motion and you simply exist is. No action. No direction. No movement.

Sure, there’s dangers to going all out, but there are very real dangers to being moderate as well.

Guess What? If you’re in a bad place in your life, you’re not going to moderately change.

If you’re 400 pounds, you’re not going to “ease” down to half your body weight. Because if you’re 50, 100, 200 pounds overweight, something is wrong. Something needs to change – drastically.

And (honestly) eating, and exercise are the last things you need to worry about. You need to fix the mental game first.

Your steps might be small, but your mindset shift is huge. You might not start doing 3,000 burpees a day, but at the very least, you have to wage war on your mindset.

When people see people lose 15, 30, or 70 pounds on Impossible Abs in 3-6 months, they lash out with terms like “crash diet” insinutating that people are just going to rebound and gain all the weight back as soon as the course is over. I’m sure a small percentage of people do that, but Impossible Abs is less of a case of a crash diet, than it is a complete rewiring of how you think & interact with food & exercise.

The problem is most people only see the physical change. It’s not a crash diet – it’s an exercise on waging war on your mindset through an exercise and nutritional protocol.

People like Toyah, who’ve gone through Impossible Abs are different. Sure, they might be down 20-30-40 pounds, but mentally, they are not the same person they were.

That happens whenever you run a ultra, take cold showers or lose a bunch of weight. Your physical change is one small aspect of the mental & emotional changes you’ve undergone throughout the journey (this is why I talk so much about cold shower therapy and the benefits of it).

That’s what this whole site is about: understanding that who you are is not defined by where you are now. That you’re way more capable than you think you are – but you won’t get there by hoping to moderate yourself there. You have to really go after it.

In order to do that, there needs to be a realization that something needs to change. Drastically. An all-out war on this mindset that this current iteration of your choices is acceptable. If you need to completely change your life, you have to want it – bad.

I think moderation is a load of crap // Go all out or don't go at all.

You probably have tried being “moderate” before. It might not have worked. If “moderation” is your code word for “nothing” then throw it out. Screw moderation. Screw conventional wisdom. Change your mindset.

In cold shower therapy, people ask “how cold is cold?” Can we just do “lukewarm” water to ease into it?

My answer: no you can not.

But whyyyyyyyyyy can’t I take a warm shower? Not a hot one, but just something that’s lukewarm?

Do you want lukewarm water? Is that how you’re going to live your life? Luke warm? Not hot? Not cold? Just “meh?”

Afraid to jump in and go balls out? Not even for a measly 5 minutes of your day? A whole .3% of your day? Point 3 percent?

If so, you’ve got bigger problems than cold water.

Pick a side. It’s time for war.