You are here: Home / Adventures / Mudathlon

Updated – 5/29 Official results have been posted. Also you can check out the official mudathlon flickr set here and see this gem of a photo of my crossing the finish line.

At the beginning of July I said I wanted to do a race this month. I didn’t care what type of race it was (5k, 10k, or tri), I just wanted to do something competitive and hopefully one of them crossed off my list. Well, as it turns out, this past weekend I did do a race that wasn’t even on my radar: The Mudathlon.

Mud, Obstacles, Beer! Mud, Obstacles, Beer! That’s the slogan of the Mudathlon. Needless to say, it’s not really the most traditional of races. In fact, they didn’t give us an actual mileage of the course. They just tell you that it’s a 3 to 4 mile race with obstacles all over the place. I had heard about it while researching some of the other races I’m looking to enter and thought it sounded like fun but didn’t really think anything else of it. That all changed when my friend Matt from Baker’s Edge challenged me to get a team from my company (Fat Atom) to challenge his Baker’s Edge team. I don’t know if he was serious or not, but anytime somebody challenges me to something there’s almost a 100% chance I’ll take them up on it so I went ahead and I got our team together, convinced Todd to sponsor us and we signed up.

The race itself was pretty sweet. There were over 20 obstacles. Some of the highlights were

O yea, there was also a 100 yard mud pit you needed to crawl through twice.

I know what you’re thinking and YES, it was awesome. It was also ridiculously muddy. Don’t believe me? 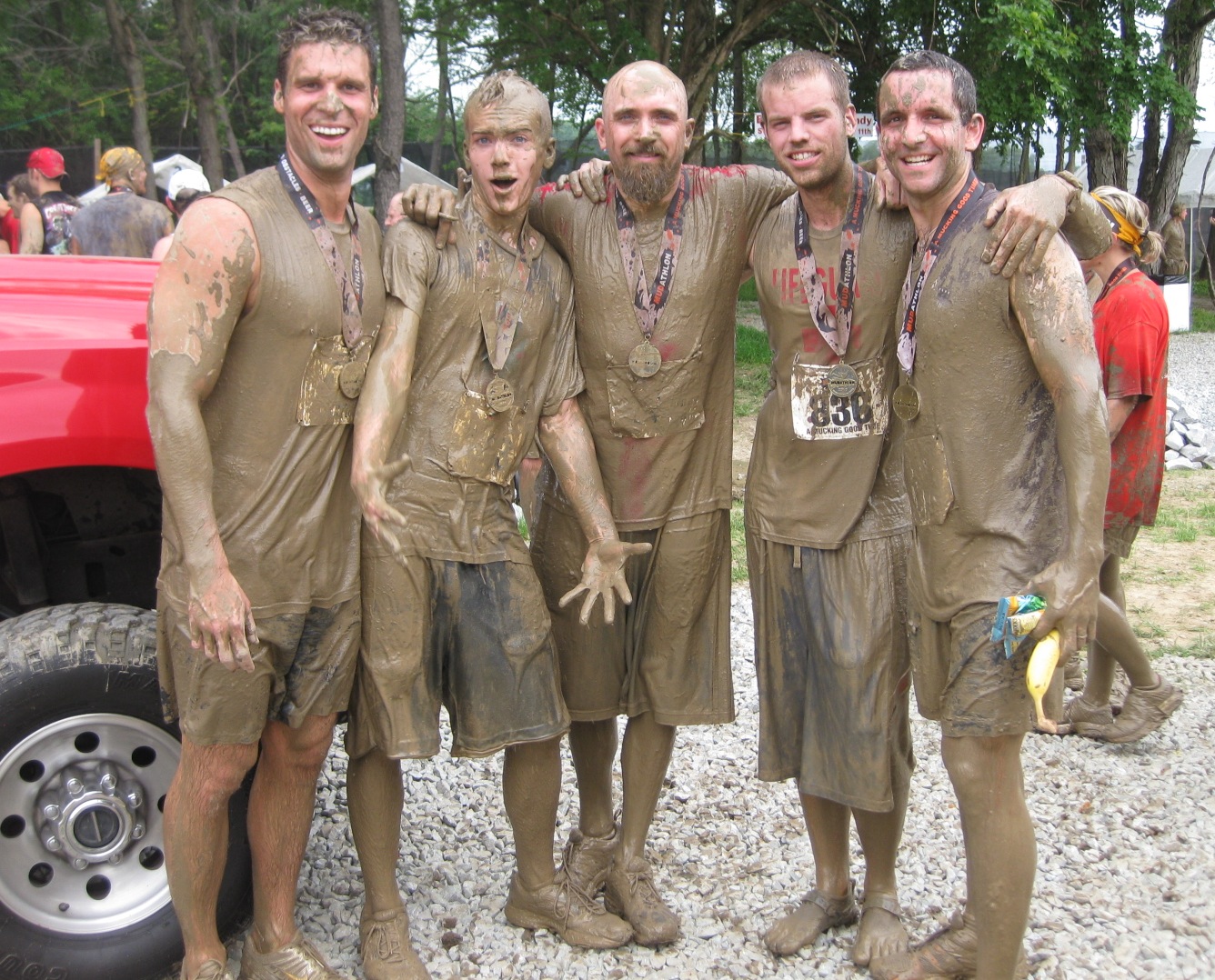 We finished at the top of our heat. There might have been 1-2 guys in front of us (it’s hard to tell when you start to overlap with the previous heats of athletes), but we were right there the whole time. Official results have been posted. Here are the overall and age groups results. I finished 28th in my age group and 76th out of almost 1,000 athletes with a time of 38:03. That’s not really a great time for a 4 miles race at all, but the whole event seemed much longer than just 4 miles. Running was actually one of the aspects to the event. With the added obstacles and addition of running through mud, the event required much, much more endurance than I anticipated. I did however, take full advantage of my Vibrams during the race. Thanks to them, I was able to run through the mud without them being suctioned off my foot and at the end of the race I was able to just spray them clean and put them back on (something many of the athletes wearing “normal shoes” couldn’t say).

The event was live-streamed online for the day. They were set up at the finish line and were asking people about the race. I was really muddy and really out of breath after the event and so I don’t even really remember much of what I said. I actually make my first appearance while diving through mud at about the 5:05 mark and the host pulls me aside to ask me a few quick questions at the 7:50 mark. [LiveStream’s player takes a little bit to load. Try to be patient].

Overall it was a really good time and actually a lot more than I initially thought it would be. The focus here wasn’t on finishing in the fastest time, but on having fun and finishing. If you’re looking to get into running or triathlons, but are a little reserved on competition, you might want to look into different types of adventure races [Mudathlon, Warrior Dash, Spartan Race] where the race is secondary to the experience you have while doing it. We had such a good time, that the guys on our team are talking about doing the Chicagoland Mudathlon coming up next month. I’m not sure if we’ll do it yet, but I do know that I’ve got the The Valpo Triathlon coming up July 17th.

What’s the next big thing you have planned?