You are here: Home / Adventures / 7 Things I Learned From My Encounter With Russell Kirsch

If you haven’t read An Unexpected Ass Kicking yet, read this first.

After debating a few days whether or not to even share last weeks post, I hit publish. Over the first few days, it got some traffic along with some residual views from  views from my six pack transformation. But Sunday, the piece really took off. It hit the top of Hacker News for 6+ hours,  and got featured on BoingBoing (twice!). In short, over the last few days, the story has received over ~350,000 visits in the past few days and been shared 40,000 times on facebook and 8,000+ times on twitter.

All this started from talking to some old man I didn’t know in a coffee shop. It was an incredible conversation and even more incredible experience. Here’s 7 things I’ve learned from my encounter with Russell Kirsch:

This is really simple.

Go create something. The only limit on you is what you can imagine. So imagine some impossible things. Then stop waiting around and go create them.

You Are Not That Important – Be Humble

I could have missed out on an incredible encounter if I would have treated Russell like anybody else you see at a coffee shop.

I could have thought I was too important for a tangential conversation with a stranger about Macs and PCs but instead I chose to listen.

On the flip side, a few people commented that Russell needed to learn humility – saying he sounded arrogant. If anything came across like that, it’s my fault in the story telling. If anything, Russell was one of the most humble people I’ve ever met. Just because someone talks about their accomplishments (even as something as big as the first american internally programmable computer), doesn’t mean they’re arrogant. He was relaying facts after I asked him to elaborate.

I’ve kept in touch with Russell since the encounter and let him know about the popularity of his posts. I asked him if there was anything he’d like to add, but he told me he preferred not to talk about his accomplishments en masse.

If one of the guys responsible for one of the biggest advances in the biggest pieces of technology in the last 50 years can be humble about their accomplishments – you can too – you never know who you might meet.

Details May Make You Right, But They’ll Probably Make You Miserable

Several people got so angry about one or two minor details, they missed the point of the story. The story was not supposed to be a wikipedia entry about the history of the computer or the creative potential of the iPad.

Sure, there are ways you can create on an iPad. Sure, there were other advances in computer technology before Kirsch. It wasn’t supposed to be a persuasive essay on the inferiority of iPads or a historical paper on the computing technology of the last 50 years. It was a story. 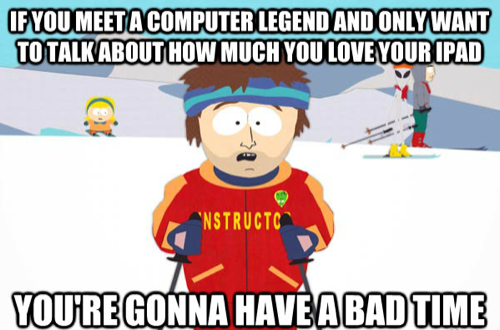 If every time you meet a person with a different viewpoint than you and all you want to do is tell them how stupid they are, you’re gonna have a bad time.

If I would have interrupted Kirsch to reference wikipedia at every possible second and asked for cited references as he told me his story – not only would that have been incredibly rude way to talk to people – but I would have missed out on the opportunity to actually talk to him, hear his story and (maybe, just maybe) learn something from him!

If I would have cut him off on the iPad comment, which was little more than an icebreaker, I would have missed his entire reasoning behind it. And, even if I disagreed with him, I would still be able to have a conversation with him since he was explaining his point of view and not bullying, pushy or arrogant about it at all.

Sure details are important, but they can also make you so dogmatic that you completely miss the point. Being open to learning from other people is more important than defending your viewpoint.

Don’t Complain – Fix It Yourself

Russell invented the first square pixel while creating the first digital picture. As much as square pixels are used (they laid the foundation for satellite imagery, CT scans, virtual reality and Facebook), they have a lot of limitations and end up getting pixelated and grainy up close (you’ll notice this if you zoom in on any photo to any measurable degree).

He mentioned it to me during our conversation.

“I’ve been waiting ever since for someone to change it – and no one has.”

He elaborated on this in an interview with Wired a few years back:

“Squares was the logical thing to do,” Kirsch says. “Of course, the logical thing was not the only possibility … but we used squares. It was something very foolish that everyone in the world has been suffering from ever since.”

Now retired and living in Portland, Oregon, Kirsch recently set out to make amends. Inspired by the mosaic builders of antiquity who constructed scenes of stunning detail with bits of tile, Kirsch has written a program that turns the chunky, clunky squares of a digital image into a smoother picture made of variably shaped pixels.

He applied the program to a more recent picture of his son, now 53 years old, which appears with Kirsch’s analysis in the May/June issue of the Journal of Research of the National Institute of Standards and Technology.

“Finally,” he says, “at my advanced age of 81, I decided that instead of just complaining about what I did, I ought to do something about it.”

So, instead of waiting for someone else to fix it, he’s started on it himself. He’s continuing that work with variable pixels now after be inspired by mosaics and even written a program to turn square pixels into variable pixels to smooth out the photo images.

Instead of complaining, critiquing and critizicing other people’s work (or even your own) and waiting for someone else to fix it – step up and fix it yourself.

You’re only done when you decide you are.

A couple people told me I made up the story. I didn’t.

A couple people lamented that Russell was bragging. He wasn’t.

I’ve said from the beginning – do something worth writing about…then WRITE ABOUT IT. People love good stories and you’re not bragging if you’re simply relaying facts of what happened.

If other people get offended by your stories, then maybe they need to step up their story. If you’re bored with life, try living a better story yourself, rather than trying to have other people live worse ones.

LifeTip: If someone’s accomplishments make you feel small, there’s two things you can do. You can get mad and angry about it and let it make you feel really insecure OR you can use it as a challenge and inspiration to do something yourself and step your own game up and start telling a better story yourself. I recommend the second option (after all, that’s why I started everything I’m doing).

Live a good story. Then don’t be afraid to tell people about it.

Most of all. Stop reading. Start doing. There’s a lot of things that haven’t been done yet that need you to go do them. Go.

Thanks Russell. Time to step it up indeed.

Leave a Reply to Once a Weekly › Issue 4 Cancel reply