You are here: Home / Hacks / The Power Of Why

Why is a powerful question.
Your answer to that question is even more powerful. It defines your success. In fact, almost always your answer to why determines if you will succeed or fail. However, too often we fail to ask the question why. When making a decision, most people have a thought process that asks three questions in the following order:

What do I want? Lots of money
How do I get it? Get a good job/start an awesome business/win the lottery
Why should I do it? …So I can have lots of money

When a person starts with the idea that they want to just have a lot of money, there usually isn’t a greater reason behind it. Most people want money because we’re told money is good for you, like your vegetables. More money = More happiness – Right?

Well, if that’s true then why do you see so many rich people so unhappy and unfulfilled? Why does more money only seem to bring more problems [RIP BIG]. The reason is that these people finally have the what, but they sitll haven’t answered the reason why.

This happens all the time

Let’s take another scenario: physical fitness.  A lot of people have New Years Resolutions. They want to lose x number of pounds, but a lot of time, they don’t have solid reason why. Their thought process might look like this:

What do I want? To lose weight
How do I get it? Exercise, diet and exercise some more
Why should I do it? To look good naked

So why do we do this?

Check out this graphic. 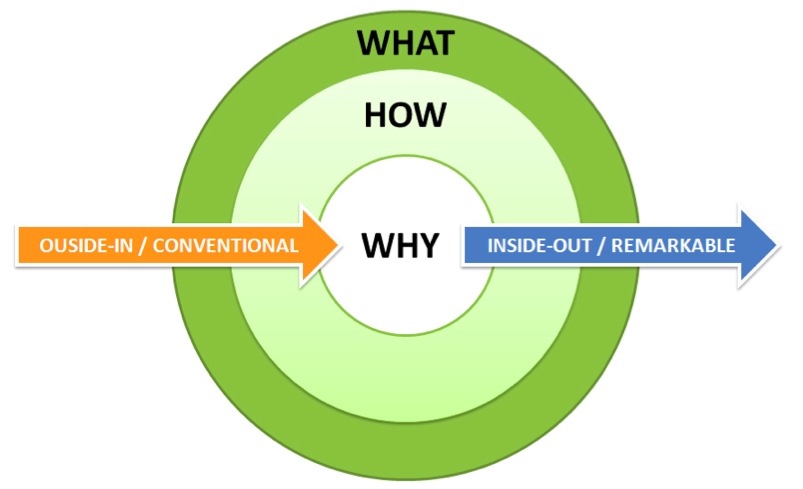 Most of the time, people operate from an outside-in attitude. They figure out what they want to do and how to do it, but neglect to reflect on why they’re doing it. This means that when they hit a snag in the road and start to question if they really “want” something in the first place, they don’t have an answer. They never answered the reason “why” they’re doing it in the first place. This usually ends up with them abandoning their new initiative when things get a too difficult. Even when they accomplish whatever it is they’re going after, they still feel like they haven’t “arrived.” The wealthy person isn’t happy because they have money, but no use for it. You can look good naked, but chances are that won’t be enough to keep you in the gym when you hit a wall.

True changes happens when people answer the why question.

So why am I doing this?

That’s the why. When you have that answered, the what & how are easy easier. Chances are you probably have an idea of what you want out of life and the steps you need to take if you’re really serious about doing it. However, if you want to be successful in the long-haul, you’re going to need a good reason why. If you figure that out first, you’ll be able to keep going, even when what you’re doing seems impossible.

Big Thanks to Matt Gartland for the inspiration for this post as well as the graphic for it. I asked Matt of Healthy LifeStyle Design if I could share and elaborate on this graphic from his newly released manifesto – Fearless Health: How to Thrive in a Unhealthy World. It’s a great FREE resource if you’re looking for an solid understanding of the why it’s important to live a healthy life in the first place. You can learn more about FH here or download it immediately here. It’s completely free so don’t worry, I dont make any money off of this. I’m only recommending it, because I think it’s worth your time. Like everything on BIT, this post is ad-free and contains no affiliate-links If you have any questions on this, check out my zero-ads policy or shoot me an email.
Tweet
Pin6
Share2
8 Shares