You are here: Home / Adventures / Things Will Never Be Perfect – And That’s Okay

My name is Joel Runyon. I used to be a perfectionist.

There used to be a time where I was an absolute perfectionist. Everything always had to be perfect. Down to the very last detail and I wouldn’t ever, ever, ever let something go live until it was absolutely perfect. There was only one problem…

I never got anything done.

I was waiting for things to be perfect and they never will be. Ever.

When I release my manifesto last year, I thought it was perfect. I should have known better. Apparently, somewhere along the way, I missed a typo. A big typo. On the first page. Awesome. That’s right, after months of dithering about releasing a manifesto, I released something with a massive typo on the first page. 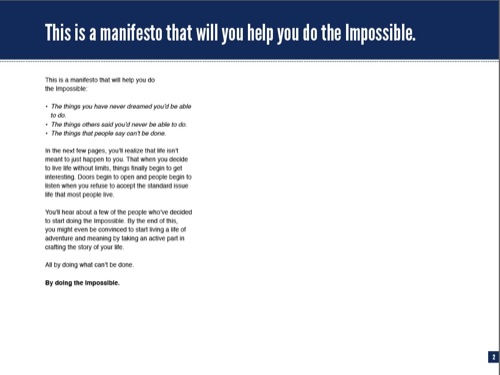 Do you see it?

So guess what happened?

The world ended. People read the first sentence, exploded with outrage and flooded my inbox with complaints about how useless the manifesto was, how terrible of a speller I am and how I shouldn’t write anything ever again. I then sat in my closet and and cried for a few days.

Well…that’s what I thought would happen.

Turns out a a few thousand people downloaded it. I got a lot of really great feedback and some emails from people who were really impacted by it.  Oh, and I had one person notice the error and give me a heads up about it (who was really nice about it too!).

I talked to Steven, we fixed it and the corrected version is up on the site.

Are there other typos throughout the book? Probably. I’m not perfect and I don’t claim to be, but life isn’t about being perfrect.

It’s about growing, and getting better along the way while learning from the mistakes you do make.

Here’s the real problem I have with perfection: Perfection is selfish.

Two scenarios could have happened with the manifesto.

I could have scrounged over the manifesto infinite times (apparently 20+ edit sessions with Elisa weren’t enough!) and never have released anything because I could potentially be embarrassed about a typo (they’re insidious little things).

Or…I could do the best I could, release it when I said I would and potentially help thousands of people who read it and endure the onslaught of embarrassing emails from grammar nazis around the world who suddenly have less respect for me because of an extra word.

I chose to do the best I could because when it comes down to it, the opportunity cost of helping thousands of people because I was worried about my own ego, is a really selfish trade-off to make (especially when I’m already in the habit of looking stupid every now and then).

Oh, and in case you’re wondering, the new, slightly more perfect, Impossible Manifesto is now available at the HQ. If that typo is really bothering you, you can head over and get a copy now. 🙂

I spoke to a class at the University of Wisconsin Superior twice over the last semester. The freshman year seminar class was put on by Impossible Doer – Micky Fitch and was about thinking and living differently than what everyone says you should. At the end of the semester, they had to do a presentation and all decided to do theirs in their new Impossible T-shirts. Here’s a small group of them dominating their end-of-semester projects after which they all became deans of the school. If you still haven’t picked one up yet, you can grab yours for $20 over at HQ. 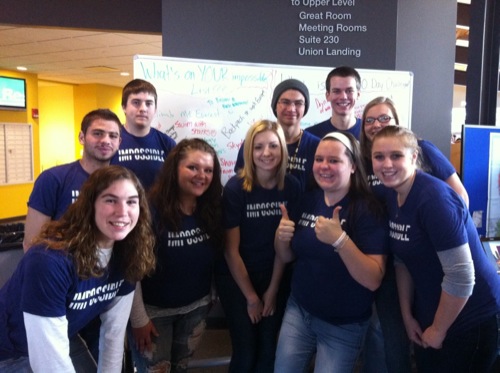