I’m back! After more than 4,500 miles and 70+ hours in the car in less than 14 days, I’m back in Indianapolis. Here’s what the final itinerary looked like:

While it was a little colder throughout the trip than we had hoped, it turns out cold [like most things] is a relative thing. While South Padre didn’t get above 65 degrees the entire time we were down there, we did narrowly avoid the 24 inches of snow that fell the day we left Indiana [and the 12 inches that came the day after]. In that context, I’ll take the 65 degrees any day. 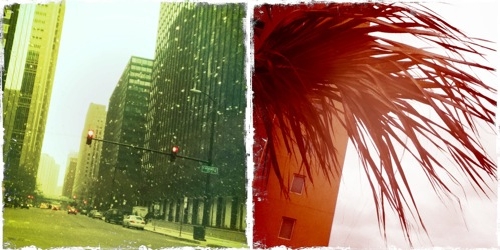 We got to visit almost everywhere we wanted to go. Almost. Unfortunately, we arrived at Dino World at night just after it had closed, so while I have a few dark pictures of the outside of the place, I am seriously lacking in photographic evidence of our presence there…bummer.

Also, throughout the trip, I got to meet up with several blogging friends including Jenny, David, Alisha, David, Chase and a lot more friends that don’t always hang out in the blogosphere. It was good to see everyone and I really enjoyed the trip, but I have to say that I’m excited to get out of the car for a bit and start using these legs of mine as I’m starting my marathon training.

For those of you that asked for video postcards, I was able to shoot almost all of them. All said, I shot about 15 different postcards throughout the trip. If you asked for one, you can find it at the link below.

There were a few postcards that I wasn’t quite able to capture so Niels, Larsen, Kat, Dane & Matt – I owe you. Shoot me an email and I’ll make it up to you.

I really enjoyed shooting these postcards, so if you enjoyed them, let me know and I’ll see if I can’t do some more on the upcoming trips.

There’s one thing I learned from this trip: If you’re going to do something, see if you can do it big. And if you have a few smaller things you’re interested in doing, see if there isn’t a way to combine them into something big.

Driving to Texas isn’t necessarily the most interesting thing in the world, and driving to Canada in January isn’t that crazy either. But when you combine them and drive all the way through Texas to Mexico, then turn around and drive all the way up to Canada and then back home, something changes. It suddenly becomes a lot more interesting to do and a lot more interesting to talk about because it becomes an adventure instead of just something else you’re doing for a week. It adds a new element to your story and gives it another purpose, instead of just being random events that happened.

Speaking of skydiving, if you’re still interested in jumping out a plane with me, you can still sign up for more information here [no commitment required] –> WDS Skydive Signup Form. And yes…it’s going to be big :).