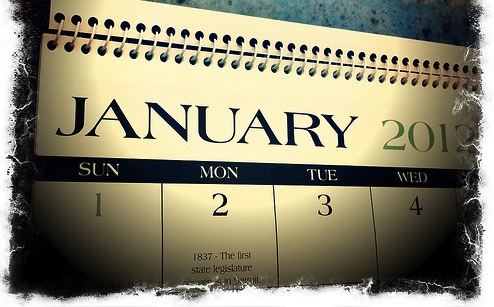 2011 was a heckuva year. I did some things I never thought I’d be able to do and started down a road I never really planned on going. It was a little crazy to look back on the last 12 months and see what happened. But the past is the past and the only thing that matters is now. What are you going to do now? 2012 just started and you’ve got a whole new year to do something impossible. Here are some of the impossible things I’m planning for 2012

Launch My Own Business

This has been on the list for a while and while I did this back in 6th grade with my own lawn mowing business, this is the first time it’s been do or die on the business front. This happened defacto a couple weeks ago when I left my job. With no more income streams, I guess I’ll have to make one. Challenge Accepted :).

Aside from my private consulting that I don’t really offer publicly, I’m launching a few more separate revenue projects separate from Impossible HQ. Also, besides the Impossible Tshirts (see a very good-looking gallery of impossible people rocking them here), I’ll be launching my first major guide at HQ. I’ve announced this in the League already, but I’ll make another public announcement shortly as I sort details out.

Overall I think this is a good step forward. The League is moving towards being self-sustaining and HQ will soon be as well. This should not only increase the time I’m able to spend on these projects but also increase our reach and ability to help more and more people do the impossible. That’s a win2 (win/win) if I’ve ever heard of one. The blog, of course, will always be free as my little gift to you guys :).

One of the things I’m good at is STARTING. I’ve alluded to a few things. The first is another free gift that should be out early next week. After that, I have 3 major projects that I’ll be launching in the first 3 months of the year. Besides that being incredibly daunting & ambitious, I think launching is addicting. I have a lot of ideas and there’s no speed limit to implementation other than myself. So I’m going to try what I can and do it well. This keeps in line with one of my favorite ideas – throw a few things at the wall…see what sticks. Go with what sticks.

Do Something I’ve Never Done Before

Well…starting my own business. Check. But more than that, I’m going to push my limits in ways I never have before. We’re meant to push our limits. To go beyond where we’ve gone before. To test and see what really is impossible. Otherwise, we might as well be dead. I’ll be doing several things this year that I’ve never done before. Whether it’s running farther than I ever have or trying out new stuff that I’ve never even contemplated before, I’ll be expanding the circumference of impossible in my own life.  That scares the crap out of me – so I guess that means I’m doing it right.

Try Something I’ve Never Seen Anyone Do Before

I have one specific project in mind that I’m looking to develop that I haven’t seen any other blogger take on before. Ever. That only means one thing. I’m either a genius or crazy. Maybe both. Probably neither. :). But I’m going to try it, see if it works and I’ll find out one way or another. One, because I’m stupid excited about this (it’s been rolling around in my mind for the last year), and two because if I’d already seen people do it and succeed, then it wouldn’t be impossible.

After speaking to a University earlier this year (and having them ask me back!), I think speaking is going to have a big role this year.

I don’t have a specific number of talks nailed down yet, but the one talk I had last year is more than zero I did the year before. On that scale, if I do two talks this year, I’m right on track. BOOM. I have a short talk tentatively on the books for February (I’ll let you know where as soon as it’s confirmed) and have a few more opportunities on the dockett. Now to take advantage of them!

Go on an Adventure …

…and take a bunch of people with me. Skydiving at WDS was a blast last year. Not only did 40 people face their fears, but no one died. Now I have the daunting task of figuring out how to do something similar. The fun part isn’t as impressive to me as the “not-dying” part, so if I can somehow figure out a way to get both to work, I’ll have struck gold. This should be fun – I just have to figure out what it will be :).

Every time I do something I’ve never done before, I discover a whole new arena of what I think is possible. Each time it’s like I break through a wall and I get a whole new field to play on. This year that happened a lot. When I started this thing, I really didn’t know if I could do a marathon or a half-ironman, much less both of them in six months. I’m stepping up a lot of things, so 2012 better get ready.

I’m always amazed at how little fun people seem to be having with life. It’s almost as if they take some sort of pride in slogging through mundane work and treat it as a battle scar. I love the great impossible quotes about getting stuff done and not letting excuses get in your way – they’re needed and sometimes you need to do the work that seems the hardest to be done – but out of all the quotes about the impossible, one of my favorites is by Walt Disney.

It’s kind of fun to do the impossible.

Shattering the limits of what you thought was impossible is absolutely fun. I’m determined to have more fun. Whether it’s making fun of Steve Kamb’s uncanny ability to be the #worldsleastinterestingman, going on road trips with homeless guys or watching amazing people do extreme sports, I’m going to have fun. Lots of it. Otherwise, what’s the point?

The most certain thing on this whole list is I’m going to fail. Probably a bunch. Probably spectacularly. And you will all get to laugh at me, see me lick my wounds and foolishly get back up and try again.

I wouldn’t have it any other way.

While I haven’t been off to quite a fast start on the failure front as last year (I was dominant last year), it’s going to happen, I’m expecting it and I’ll welcome it when it happens.

Failure happens. It hurts, but it’s not fatal. All it means is that you’re getting close to the edges of impossible – and that’s a great thing.

You got a huge gift a few days ago – a brand new year to do whatever impossible things you want to do. What are you going to do with it?

In case you didn’t know, the blog here is just a small part of a bunch of bigger things going on. If you’re new, check out Impossible HQ, the headquarters behind all of this (you might notice the pretty little top-bar on the blog thanks to Spyr). We’ve also got a community, the impossible league, where a whole bunch of people like you and me get together to help each other do impossible things. We’ve only been around a short time, but it’s amazing what’s been accomplished. Major hat tip to Tristan for putting this little round-up together for us. It’s pretty awesome if I do say so myself. 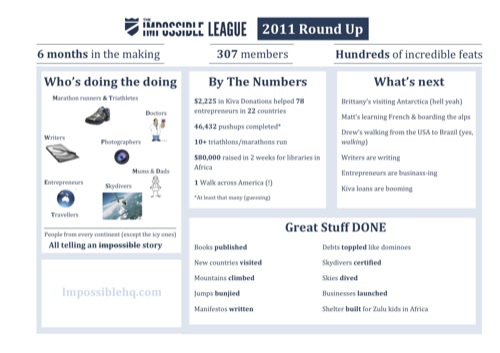 Download your own copy, print it off and post it on your fridge. Big things are happening around here.

In the fun news of the week, we were featured on ProBlogger’s 20 Bloggers to Watch in 2012. While neat to think about how far things have come for a few seconds, that only means we got a lot more people watching now in 2012. Better make it epic! Bring it 2012.