You are here: Home / Gritness / A Few Updates on Cold Shower Therapy™

Cold Shower Therapy™ (daily five minute cold showers) has become one of the most interesting things I’ve talked about since starting IMPOSSIBLE. I’ve received more stories and more hate mail about this one concept than about almost anything else I’ve written. Here’s the premise of CST:

If you’re clueless about what CST is, here’s your CST starter guide.

Since I’ve started writing about CST, over 23,000 people have taken a cold shower with me. I was asked to do a TEDx talk, which I made about CST. I almost backed out as the idea of speaking at a TEDx event was intimidating and public speaking always makes me feel a little nervous.

But I took my own advice, took a cold shower, sucked it up, and did the talk. It was to a small group of people in an auditorium at Loyola University in Chicago and, while people enjoyed it, I didn’t expect what happened next.

Eighteen months later, that talk has been viewed over 100,000 times on YouTube (and has received way too many scary internet comments). If you haven’t seen it yet, here it is:

And to think that I almost didn’t do the talk because I was nervous. Cold Shower Therapy™ really does work (and I really do use it!). 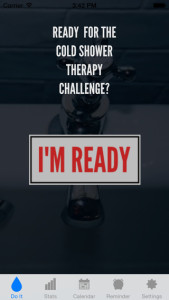 We’ve given the app a new design and a few extra features that people were asking for. It now has a leaderboard and a streak tracker, which will help you to keep practicing being uncomfortable on a regular basis. On top of that, we’ve got a whole slew of updates coming soon, as well as an Android version. And, of course, as we get more feedback, we’ll be adding more requested features along the way.

This is just the start. There are a lot more tools like this up our sleeves and there are a few new projects coming soon that you might have to take a cold shower to prepare for.

Then take a cold shower (and leave a review if you liked it).

I’m going to be using the app myself to get ready for my upcoming challenge. It’s the toughest challenge of my life so far and I’ll need a cold shower (or thirty) to be ready for it.