2012 has been a crazy year. It’s been absolutely wild.

I think the picture of me skydiving in Wadi Rum sums it up pretty well. 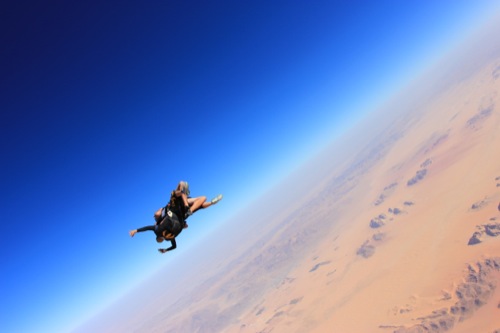 Thrown out of a comfortable, stable situation and hurtling out of control at ridiculous speeds towards an unknown landscape while trying to make sense of it all, enjoy the ride and land without dying. Yup, that sounds about right.

This year I quit my job, and took a shot at the solo entrepreneur lifestyle. This year, we had our first (2) million visitors visitors, added several thousand more subscribers and a ton of great stories happening. It seems that things go by so quickly, but at the same time, it’s been forever since January last year and there’s still a lot I have to do. I sometimes feel like I’m moving too slow! As much as there is to do, it’s good to look back and see what’s actually been accomplished every year.

Here’s a look at what happened around Impossible HQ in 2012.

People with a soft mentality disgust me. They live and die the same person they were made. – David Goggins

Also, flying under the radar, our Kiva lending team has lent over $13,000 to entrepreneurs all over the globe. If you want to join, you can do so here. Somewhere in there we took 30 people bungee jumping as well.

The close of every year is always interesting. I never have quite as detailed a plan as I like, but it always ends up being enough to get started and make an adventure of it. Sometimes I feel like Michael Westen in Burn Notice.

Max: What’s going on here? Do we have a plan?
Michael Westen: A plan, no, I… got some tactical goals, and a rough approach?
Max: A rough approach, well, that’s terrific. Thank god we got that, because we don’t have backup, video feeds or working coms.
Michael: Welcome to my world.

Obviously, I’m not perfect and I’ve got a long, long ways to go and lots of things to do, but I’ve got some tactical goals and a rough approach. I’m working on a plan. This year is gonna be big.