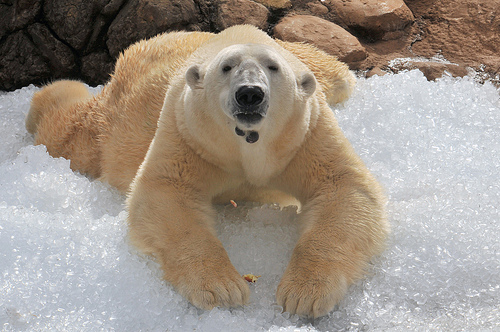 About six weeks ago, one of my co-workers asked several people in the office if they would do a polar bear swim here in Indiana in late February as a fundraiser for the Indiana Special olympics.

Getting the picture? It’s not a good one.

I hate the cold. A lot. But, I like adventure more and having never done a Polar Bear swim before, I wasn’t going to turn down my first chance to take part.

We got up early Saturday and headed to the state park nearby. There was quite a crowd there, so we had to wait for an hour or so until it was our turn to jump into the 34 degree water. Note for you barefoot enthusiasts: Vibrams are good at a lot of things, but keeping your feet warm while standing in snow for an hour isn’t one of them.

I was expecting the plunge to be a hole in the ice like a lot of the other dives I’d seen on TV, but this one was more straightforward. It was just us and the creek. There was a little beach area and we were just supposed to run into the creek and run out. There was a semi-circle of firemen standing in the waterabout 40 feet or so infrom the shoreline making sure that people didn’t have a heart attack/drown/go-for-a-swim/get-lost-at-sea.

Most of the people ran straight out to the firemen and back.  A few brave souls ran the gauntlet of firemen and ran from one end to the other. I decided to be one of those people.  I figured if I was going to be freezing every single appendage on my body at once, I could stand 30 more seconds of complete total-body numbness.

I’d explain the actual plunge, but people recorded it on video, so it’s probably better [and more entertaining ] if you just watched it:

[If you’re reading this in an email, click here to watch the video] 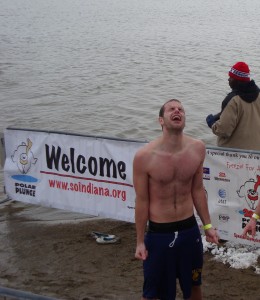 When I finally got out, I couldn’t feel my legs or feet. It felt like I was walking on bricks. I only submerged completely twice and the whole ordeal lasted less than 90 seconds, but it felt like it was at least 2-3 minutes of torture. Here’s what I looked like when I came out of the water. Yes, it was that cold and yes, I am a big baby. It felt like a thousand miniature knives were stabbing me all over, but the pain was temporary and it was for a good cause. In my book, that makes it all worth it.

Here’s every post from BIT this month. If you’re new or just have been behind for a bit, here’s your chance to catch up:

The WDS Skydive planning is going smoothly. We have an awesome group lined up and things are coming together very nicely. It’s going to be a lot of fun kicking people like Jacob, Steve & Matt out of a plane.

Marathon training is in full effect. This past Sunday, I set out to run 12 miles according to my training schedule. It turns out that I got lost in the modern day labrynth known as a subdivision and ended up running closer to 14. No thanks to the subdivisions, but I’m officially “halfway” to my marathon distance. I also ran this run comfortably about 1o minutes faster than I ran 13.1 back in November. +1 for progress!

Impossible – The Manifesto. I’m way behind on this and I have no good excuse other than my priorities have been elsewhere. I’ve set a new date: April 23. Look for it then. It’s coming. I promise.

In case you wanted more, here’s the full set of photos from the 90 seconds of pain. Please enjoy watching my body temperature drop to an unhealthy number.

Are you new to BIT? Have you been around a while, but just been lurking in the shadows? Here’s a few ways to get started:

Join the League (get updates via email)

As always, thanks for reading. I really do appreciate it. I’ve got so some very cool things planned, so stay tuned.