Shake off your hangover and wake yourself up.

It’s 2013 and we’re not wasting anytime with getting started on your new years resolutions.

We are not wasting any time. Today’s the day you can get started and get after it. I’m willing to bribe you to help do it. 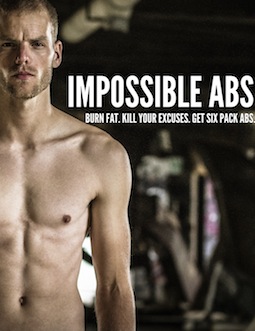 Lets talk about the goods first because – lets be honest – they matter. The good news is that  I’m giving away a deluge of prizes. Yes, a deluge. Here’s what’s at stake. These are not your mom’s contest prizes…

I also reserve the right to lavish said winners with copious amounts of great looking impossible gear – but that’s just a rumor I’ve been hearing that may or may not be true :).

Okay, now that I’ve got your attention, here’s how you can win all the previously mentioned deluge of prizes.

1. Get one of my programs if you don’t have it already.

2. Actually Do it (this is pretty crucial).

3. Take a before and after picture, and document your progress (bonus points for progress photos).

4. Send in your amazing success story.

5. Win the deluge of prizes.

How Long Is It?

The contest runs today through March 3rd. That’s 8 weeks and some change (to make it end nicely on a Sunday and all). That’s enough time to go through Impossible Abs 8 week program once or the No Excuse Workout twice. That means you get started now. Bonus points if you use Cold Shower Therapy to kickstart yourself out of a rut.

Winners will be judged by a completely biased panel of judges including me, myself, and I and announced 1-2 weeks after the contest ends.

How do you know which one to pick? If you want to really get after it and specifically burn fat, I don’t know of a better resource out there than Impossible Abs. The no excuse workout is awesome as well, but to be honest, it doesn’t have nearly the level of detail that Impossible Abs does. While you can see incredible results on both programs, but I’d be lying if I said that Impossible Abs customers won’t have the distinct advantage of a more intense workout & the in-depth nutritional component.

Get The No Excuse Workout

If you’re taking the challenge, do me a favor and tweet this – a little healthy competition is good for you. 🙂

Whether or not you join the contest, I’d like to say thanks for being a part of what’s going on here at Impossible HQ. 2013 is going to be awesome.