You are here: Home / Fitness / Why Racing A Triathlon Is The Perfect Fitness Goal 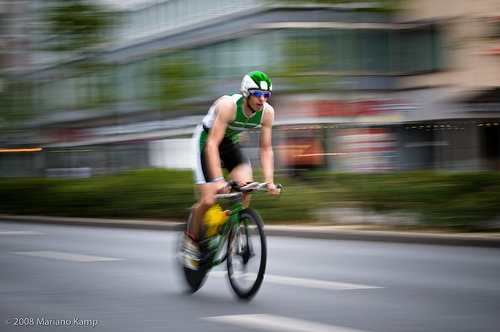 Most people are not very good at setting fitness goals. They try one thing after another, get distracted and end up frustrated and annoyed that they started yet another thing, but didn’t finish it. My buddy Vic wrote a great post on how to finally achieve your fitness goals. You should take 5 minutes to read it all here but the three main points are

Time. Money. People. The Trifecta of motivation. And that’s exactly why running a triathlon is the perfect goal to get back into shape – it encompasses all three perfectly.

You’ll Have a Solid Countdown

As soon as you sign up for that race, that race date is ingrained in your head. You know when it is and exactly how long you have to get ready for it.

You’re Invested In It

Once you put down the $60-$100 for a race, you’re committed. I don’t make a habit of wasting money. If I put money down on something, I’m going to go do it – whether or not it’s pretty is a whole different story – but it’s going to be done no matter what.

Once you have money on the line – you become more invested in the race emotionally because you’ve already invested financially in it. It’s not brain science, but it works.

If you’ve ever played poker with fake chips, you’ll notice the difference. When you’re just screwing around with friends, people tend to care less, take bigger bets and not consider the consequences of their actions – because there’s no real chance of losing any actual money. When there’s real money on the line, you take more time to think things through, evaluate your decisions and play for keeps.

Put your chips in the game. Sign up for a race. Stop talking and start playing for keeps.

People Will Be Watching

Your friends will be there. So will a lot of random people you don’t. They all get to see you in your spandex making the occasional unflattering face. Of course, it doesn’t really matter when you cross that finish line, everyone – even the 85 year old man who’s breathing so hard he sounds like he’s going to die or the middle-aged woman who walked most of the race – gets cheered for and congratulated. Because they did it. They signed up, committed, followed-through and finished.
If you think running a triathlon is hard, try explaining why you signed up for a race, told everyone you were going to do it,  then showed up and quit or backed out altogether..
Peer pressure is an incredible thing – use it for good.

Also, the whole drowning* thing is a pretty big incentive. Knowing that when the day comes, you’re going to have to figure out how to swim 600m in open water one way or another is a great incentive to get in the pool, practice and get better. Don’t drown. It’s completely overrated.

Fortunately, you don’t have to be superman to run a triathlon (in fact, I’m not even sure how good he is with water). You can do it in 3 months with the right training and motivation. But, the very first step I tell anyone is to sign up for your race – because once you do – there’s no turning back. With the right training, you can run your first triathlon in just 3 months. If you’d like to learn more, visit Impossible TRI.

*You won’t actually drown – there will be plenty of lifeguards and buoys to save you if you have trouble :).