I’m pumped that I did it, but not so pumped about my time. My goal for the race, was 1 hour 15 minutes. I actually thought that that was a realistic time for what I wanted to do. In reality? I wasn’t even CLOSE. As it turns out I made quite a few miscalculations…let me explain…

The 20-29 male age division was the first wave to start.  I wedged myself somewhere in the middle and we all took off as they sounded the horn. Everyone was kicking and grabbing trying to find the water we were supposed to be swimming through, but with so many athletes it just seemed like we were swimming through people. I started to swim really fast as I was caught up in the chaos, but realized I didn’t need kill myself on the first leg of the race. I slowed down to my regular pace and finished right around where I thought I would. I usually swim 50m in a little under a minute in the pool, so I expected to finish right around 8 minutes.  While making my goals the other day, I gave myself 10 minutes, since it was a new environment [open water] with lots of other people and the added part of the race between between finishing the swim and getting to the transition area mats.

This is where it got fun hard.

Ah, biking. This was the easy part, right? Just 12 miles on nice, flat, Indiana roads. Wrong! Apparently Valparaiso decided to pick the few roads in the northern Indiana region that actually have hills. The terrain was a surprise to me but I kept going. I thought I was pedaling along at a good clip but I started to notice a pattern. I was pedaling twice as fast as the guys around me, but EVERYBODY was passing me. What’s going on? Then I realized:

The following is a public service announcement for any future triathletes:

Now I don’t want to blame my poor biking time on my mountain bike, I realize now that I was woefully unprepared for the cycling portion of the event anyways and I wouldn’t have set any records even with some amazing top of the line bike, BUT I definitely think it played a part.

I’m not of the school of thought that you have to have super nice equipment in order to compete well, but it is important to have the “right” equipment. I honestly did not think having a road bike would make that big of a deal, but it turns out they’re called “road bikes” for a reason, they’re made for the road! The width of the tires on road bikes means there’s a lot less friction on them than on the mountain bikes, making it much easier for them to keep up their speed. Also, the road bikes tires are much bigger as well so you can travel farther without doing as much work. I know this is really elementary, but was one of those things [at least for me]  that you really only start to notice when everyone starts passing you. There was one other guy on a mountain bike that I kept leapfrogging and commiserating with throughout the bike portion. We both took turns at watching other zoom by us while we pedaled away frantically on our mountain bikes while going nowhere.

[Don’t believe me? Watch this video. See how fast I’m pedaling & how slow I’m going. Yes, I know I look like an over-sized 12 years old on an under-sized bike]

Between my unpreparedness & poor choice of bike, I ended up sucking pretty hard at this part of the race and I was not very happy with it at all. I ended up 16 minutes slower than what I hoped to be. Instead of clipping along at 20mph I dragged along at about 14mph, which isn’t what I was hoping for.

Note: If not having a road bike is the only thing keeping you from doing a triathlon, suck it up and do the tri on your mountain bike. You will go slower and it will be harder, but at least you’ll do it. If you’re just using your lack of a road bike as an excuse not to do a triathlon, screw it and do it on your mountain bike. However, that said, if you have a choice, go with the road bike. It will help…a lot.

I got to the second transition area, jumped off my bike, took off my helmet, ran my bike to the rack, ran around the loop and off to the running portion.

I started the running section, but I’m not sure you could call what I did “running.” It was more like plodding. It’s a very weird transition from cycling to running because you’re using your legs in both events, but in very different ways. So not only are your legs tired from the biking, but they’re also trying to change from “cycling mode” to “running mode.” I never actually practiced this before, so this was completely new to me and caught me off guard.

I won’t lie, I was pretty slow.

The route took us down a neighborhood road, to a cul-de-sac and back. 3.2 miles.  Unfortunately, the roads didn’t have many trees and the sun was out for the day so it was hot as well. There were a few times I just wanted to stop and walk for a bit, but I just made myself keep “running” along, no matter how slow that was. As I passed the 3 mile marker and got closer I heard music and got pumped up and started to pick up my pace [you can’t look tired at the finish line right?] but I was immediate deflated when I realized the song was Taylor Swift “You Belong With Me.” Really? I mean she’s a step above Miley Cyrus but still. Other people get to run into an Usher soundtrack or the Rocky montage theme song, and I get to finish with Taylor Swift. Awesome. 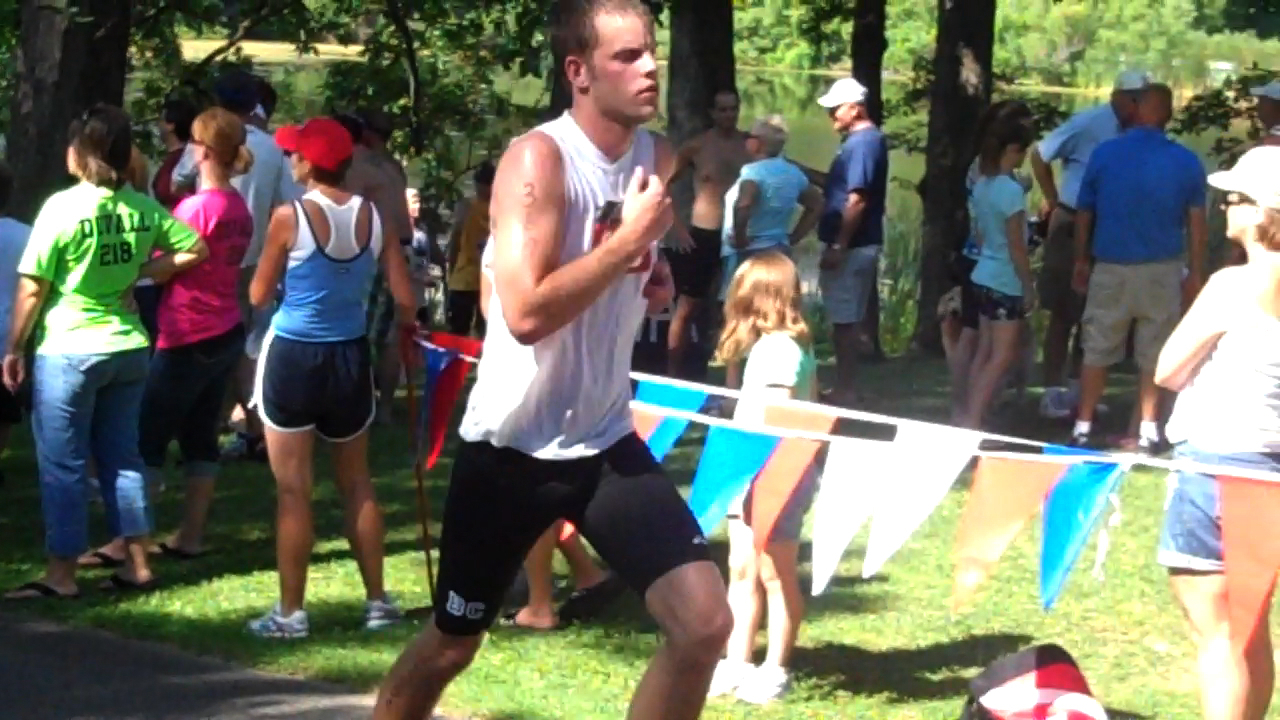 At the finish line

It’s funny how things work out. I was worried the whole time about the swimming part because I’m not much of a swimmer, but it was actually the easiest part for me. The transitions [which were the other piece I was worried about] weren’t terrible either and actually averaged out to be 90 seconds a piece, which is what I was shooting for. The hardest part for me overall was the biking [which absolutely gassed me] and then transitioning from the bike to the run and getting my legs used to the difference. I didn’t practice either of those, and those are what gave me the most problems. I knew I was going to be slower on the run because it was after everything else, but I really underestimated how much the biking would take out of me.

Despite not having a stellar race time, I did have a great overall time during the race and most importantly: I finished. Taylor Swift music and all. It’s definitely an exhilarating thing to be able to finish a triathlon and knock another thing off the impossible list at the same time. Every time I’m able to cross one off, it makes all the other items on there seem a little less impossible. I’m planning on doing more triathlons in the near future and definitely am going to change a few things in order to be more competitive, but for my first one, I’m just happy that I finished!

Also: For those of you interested in more of the results: