About a month ago, I was minding my own business, finalizing some things for the massive skydiving trip I was organizing when I got a message from Mark Powers. He wanted to know if I wanted to go bungee jumping with him a few friends the Monday following WDS. Bungee Jumping. Off a perfectly good bridge with no structural problems whatsoever. “Oh” he added, “it’s also the highest bungee spot in the US.” I usually would give more weight to a death defying decision, but I was in a “yes” mood as of late. After all I was planning a massive road trip, and a skydiving excursion so bungee jumping seemed like a perfect way to complete the trifecta.

On Monday, 20 or of us drove out to a perfectly good bridge in the middle of nowhere and prepared to hurl ourselves toward a river and some very sharp looking rocks. We watched a few people jump before we got briefed on the jump. “What you’re going to do is jump. Yes, off this bridge. Also, hope really hard that these oversized rubber bands we attach to you don’t break. Sound good?” We filled out  some paperwork including some forms indicating whether we wanted to be cremated or have an open casket (which, by the way, is not a funny joke).

As I got the chance to fill everything out, all of a sudden, I see Nicky go flying off the bridge. The jump master yells out “You’re Next” almost threateningly so I grabbed Nate to shoot one last video for the blog before I died (apologies for the quality & size of the videos in advance). What happened next…well you can see for yourself.

Thoughts Before The Bungee Jump

Thoughts After The Bungee Jump

After I jumped, one by one, 20+ people began to hurl themselves off the bridge. While everyone had a different personal experience, everyone went through the same very predictable stages as they got ready to jump.

When they’re hooking a harness up to you and checking & double checking the carabiners you’re in sort of a surreal state where you’re “committed” to doing something, but you haven’t taken the leap yet. You’re nervous, but you don’t really know quite what to think because you’re still standing on a perfectly safe bridge. The fear hasn’t really hit you yet.

When you’re standing on the platform and looking out and down, you start to see how far down you could really fall. The fear kicks in just as the jump master yells 3, 2, 1, and you either decide to jump or you don’t. If you jump, you’re on your way down immediately. If you don’t jump when they tell you to, then 90% of the time, you don’t end up jumping at all. 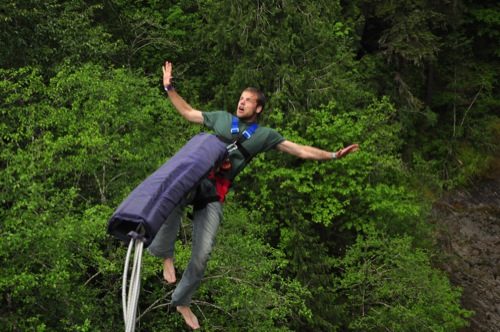 When you jump off a bridge, you have about 3 seconds where you think you’re going to die. You have a flurry of thoughts run through your head.

*Did I really just jump off a perfectly good bridge?*

*I am moving towards rocks at a very fast past.*

*This was really dumb.*

*I immediately regret this decision.*

*I hope my dental records are up to date.*

But, while those thoughts are running through your head, you’ve already made the decision (the hardest part), so there’s no going back. There’s sort of inevitability about it. Once you’re off the bridge, gravity takes over. You can’t do anything but follow gravity’s lead and fall…

When you’re falling, it happens so fast, you’re not quite sure what to do. An interesting thing that happened on every single jump was that nobody would actually yell while they were falling. They were too busy contemplating their possible death. But, as soon as they bounced, everyone let out a scream. Whether it was a scream of joy, panic, or relief, you relax just enough to start freaking out and scream. 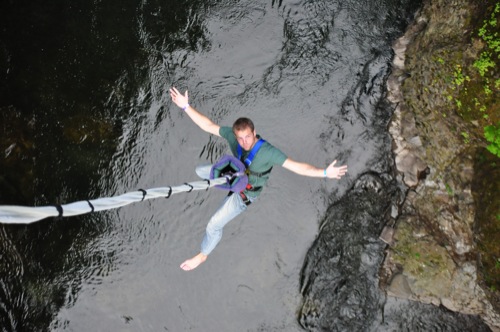 When you finish freaking out (this only lasts about a second), and realize death isn’t on the agenda for today’s activities, you’re able to breathe a sigh of relief and actually enjoy the bouncing and swinging of the bungee and enjoy the scenery around you. It’s amazing how beautiful something can be once your body isn’t in danger of smashing into it as high speeds.

Whether you’re actually jumping off a bridge or just making a big leap in life, you go through a lot of the same stages. You can prepare as much as you want, but there comes a time when you have to either jump or back out. If you jump, you jump and you’re on your way. But the more you think about the decision, the less likely you are to actually do it. Analysis paralysis. If you make that jump, you might can be so scared you literally can’t even scream. But, once you bounce and realize you’re not going to die, you might let out a scream of relief and then you might even be able to actually enjoy the ride the rest of the time. And once it’s over, well you can’t wait to do it again.

So if you’re thinking about doing something impossible, maybe you need to stop thinking. Run, close your eyes and jump. What are you waiting for? You just might have some fun. 🙂 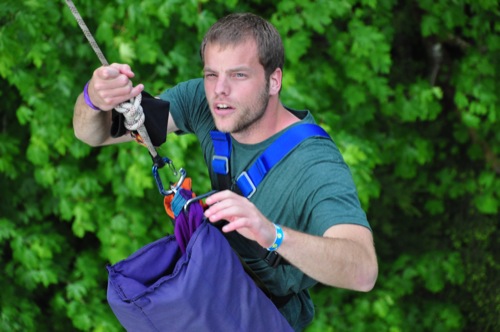 You can see the full gallery of me and 20 other people bungee jumping over on flickr. Feel free to use any image you like.