Last week, I was downtown chowing down breakfast with my friend Patrick Hitches downtown Chicago. Patrick’s like a walking terminator and made his own abs transformation a few months back.

Our talk quickly shifted from just catching up to fitness and comparing notes on our six-pack transformations. And, as we talked, we marveled just how much bad information is out there about losing weight and burning fat (and even worse, how much of it I believed over the years). After talking it through and realizing many of the same myths are repeated over and over again, I decided it’s time to do some myth-busting on 5 commonly believed myths about six pack abs.

Myth #1 – You Can Run Off Your Belly Fat

“I need to lose weight so I’ll start running.”

I have a love/hate relationship with running and while I love the challenge of being able to run farther than I’ve ever gone before, it’s an absolutely terrible way to actually burn fat. Running and getting lean are actually polar opposite goals (when’s the last time you saw a long-distance runner who was absolutely jacked and not named David Goggins?).

If you don’t believe this, lets take a look at a recent informal case study I just did using google image search. The first person is Stephen Kiprotich – 2012 Olympic Gold Medalist in the Marathon event. The second person is Usain Bolt – 2012 Olympics Gold Medalist Sprinter in the 100m, 200m, and 4x100m events. 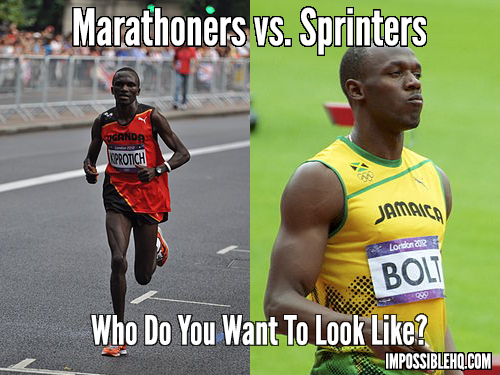 Triathletes tend to do a pretty good job of balancing the two, but that’s a whole other story.

Unfortunately, this misconception that running leads to fat loss is not only common, but ineffective. Because of that, so many people buy into it who want to lose weight and get turned off to fitness altogether. The thought-action cycle usually goes something like this.

Don’t get me wrong. I’m not against running and adding in running to your workouts will definitely make you a better runner, but it won’t help you burn fat. In fact, you might hurt yourself if you’re overweight and put unneeded pressure on your joints throughout the exercise.

Myth #1 Busted: What To Do Instead

Cut out the 2 hour cardio sessions. If you want to burn fat, 20 minute sprint sessions or jump rope interval training will do much more for you than those 10 mile runs.

If I see one more person spend twenty minutes doing crunches in a futile attempt to get a flat stomach, I’m either going to scream or cry (probably just scream though).

Crunches are not an effective abdominal exercise.

They won’t “spot reduce” fat on your stomach, and they only engage a percentage of your abdominal muscles and can put a strain on your lower back and hip flexors.

Myth #2 Busted: What To Do Instead

We have more gyms now than we’ve ever had in the history of time. And people are still out of shape and overweight. You don’t need a gym to lose weight  and get a six pack – you just need to move.

Get outside, play, do natural movements or bodyweight exercises.

If you want to lose weight, you don’t need a single piece of equipment. Skip the treadmill, and do sprints outside. Instead of bench press, do pushups. Instead of throwing tons of weigh ton of weight on a squat rack and butchering a squat, do air squats or lunges to start.

Not only are gyms not not needed, but they actualy provide MORE excuses for not working out. How many times have you thought about going to the gym but instead said:

Unless you’re trying to actively put on muscle mass, there’s no need for a gym – you can do everything you need to lose weight with bodyweight exercises with a flat space in your house or garage. And, if you really need to have a gym, you can make your nearby playground into a home gym.

Myth #3 Busted: What To Do Instead

Do the best you can, with what you have, wherever you are. I decided to do home workouts so I had no excuses. The only reason I could skip a workout was if my lazy butt decided it wasn’t worth it. You can get a six pack using nothing but bodyweight exercises and discipline.

There is no one killer exercise to get your abs to show up. Here’s the truth.

Most people need to get to sub-10% body fat before your abs will show and that happens through diet – not anything else. The annoying and difficult truth is that abs are made in the kitchen. If you want to believe anything differently, you’re going to be very, very disappointed and spend way too much money on late-night informercial products selling you the “next breakthrough workout.”

If you won’t change how you cook, you won’t change how you look. Sorry, for bursting your bubble, but that’s the truth. In my journey to lose 34 pounds in 8 weeks, I never did a workout that lasted longer than 30 minutes. I simply created a consistent intense workout and drastically changed how I ate. If you’re looking for the best ab exercise, this is the best one I’ve found:

The best ab exercise is five sets of stop-eating-so-much-crap.

Myth #4 Busted: What To Do Instead

If you’re looking for the “one” thing that will get you closer to six pack abs than anything else, take a good hard look at your diet. The paleo diet is a good framework to start with.

The biggest thing myth is that you think you can’t do it. As soon as you see someone else’s results, you immediately think to yourself:

Bullsh*t.I say that because I’ve been there. Hell, when I started, I didn’t think I could do it until I got the photos from the photo shoot back! But that’s how it is anytime you challenge the impossible. It seems impossible until the very moment you actually manage to do it.

“It always seems impossible until its done.” – Nelson Mandela

It’s easy to believe and say that it’s impossible to get a six pack while sitting around drinking Red Bull and eating oreos.

Of course you it’s impossible when you’re eating red bull and oreos. You have to change things!

But, if you change things, you can change your results. Losing fat and getting six pack abs isn’t easy, but it is simple. You just have to know what to do and you have to want it bad enough.

Myth #5 Busted: What To Do Instead

Instead of sitting around talking about why you couldn’t ever do it, get off your butt, change your habits and actually do it.

Have you ever bought into one of these myths? What other questions do you have about losing weight and getting a six pack?

I’ve put everything I know into a blueprint called Impossible Abs. Find out more here.