Cold Shower Therapy is a strategy I’ve used a couple of times in the last year to help myself start doing the things I know I need to be doing (h/t to Nick Reese for getting me hooked). If you find yourself self-sabotaging with all the impossible things you want to be doing, with avoidance and procrastination, Cold Shower Therapy is the best tool I know of to help you start doing. 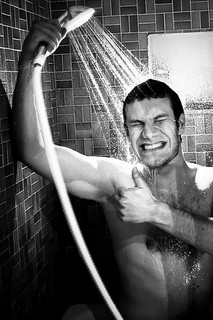 Sometimes you just have to dive in.

If you’re staring at a project and having trouble convincing yourself to start or find the beginning point and work your way through it, you might need to throw it out, start from scratch, and dive in headfirst. Planning be damned.

If you’ve been trying to lose weight with a workout here and a workout there, you need to go full throttle, lift heavy, sprint everywhere, and rid your entire kitchen of junk food.

If you’re working on your business and are overwhelmed, you might need to stop trying to plan every detail of your five-year plan and just dive in and focus every ounce of energy you have on making your first dollar.

Go so hard you stop thinking about anything else.

Go military on your goal. Be ruthless. Go a little bit crazy. Get a maniacal look in your eye that shows people your addiction and insanity. Make it an obsession.

You have to be a little bit nuts to do this. The part about addiction and insanity? It’s not just hyperbole. You need to alter your mental approach to things. Instead of seeing if there’s a way that you could possibly do something, you decide you’re going to crush it. Not because someone said you can, not because you know you can, but simply because you’ve decided to.

You stop going into things scared. You don’t worry about fear anymore, not because it’s not there, but because you have the courage to do what you’re doing despite being scared out of your mind.

You’ll probably get some weird looks from your friends, but what are they doing anyway? Exactly.

Take cold showers first thing in the morning. As soon as you get up. Jump in the shower. Close your eyes and turn the temperature to cold. Not just cold. Not ice cold. Try we-just-piped-this-water-in-from-Antarctica-because-the-penguins-won’t-swim-in-it-cold. Do this for thirty days in a row. I call it Cold Shower Therapy because it, quite literally, is therapy.

The first day you try Cold Shower Therapy (or CST)m it will suck. You’ll stare at the shower head for ten minutes and start crying just by thinking about it. Your heart will begin to beat fast. You might break out into a cold sweat. And, if you’re brave, you’ll turn it to cold for a whole five seconds before shrieking and quickly backing out of the challenge and turning the shower back to hot.

The second day, you might get the shower to run cold for a whole ten seconds, but it’ll still be too much, so you’ll turn it to hot and try to warm up again.

The third day (or however long it takes you), you’ll stare down the faucet of fear, grit your teeth, and just dive in with everything you have. You’ll turn the shower to a bone-chilling temperature and let out a few choice words involuntarily (you might want to warn any roommates that you’re planning on doing this, so they know you’re OK).

The big change happens after you decide to actually do it. As you immerse yourself in the water, you welcome the cold. You make sure it gets all over your arms, your legs, the back of your neck, and definitely your crotch. You might yell out a few Tarzan screams, but, once you decide to do it, you lean into it and you’re not afraid of it anymore.

When you decide to turn the cold to blast, you realize one thing very, very quickly:

Like, really bad. The first thirty to sixty seconds are hell on earth. They’re every bit as terrible as you imagined they would be.

But once you hit that sixty second mark, you start to adapt. The water is as cold as ever, but you’ve already gotten as cold as you’re going to get and you’re not going to get any colder. You body does an awesome thing. It starts to adapt. Pretty soon, you realize that, as cold as the water is, it’s not *that* cold anymore. The trepidation that you had before the shower is gone. You don’t have to fear what it’s like anymore, because you know firsthand what it’s like. And it sucks, but it gets better because it makes you better.

Cold Shower Therapy makes you invincible. No lie. After your first few five minute face-offs with the shower, nothing can stop you. Why?

CST shows you how weak an emotion fear really is.

When you stare at the faucet, realize the suck is going to happen, and decide to lean into it, all of a sudden you embrace the suck. Instead of running from the fear, you challenge it. You dare it to beat you. If you’re crazy enough to do that, fear usually turns around and runs home pretty quickly when it sees you’ve decided that you won’t lose.

The same thing happens when you get to a project in the middle of the day and you hesitate for a moment instead of doing it. You can do this with a workout, a business task, or even that phone call you know you need to make but that you keep putting off because you know it might not be 100% fun and games. If you don’t want to do it, you put it off and move onto something else. That’s standard protocol.

But once you’ve gone through Cold Shower Therapy, things change. After you’ve stared at the shower head and conquered the cold in the shower that morning, you begin to recognize that hesitation. You realize the hesitation you have when it comes to the project/business/workout is the exact same fear you see in the shower. And you realize you’ve already beaten it once that day and that the only way it can actually hurt you is by stopping you from doing what you need to do.

That hesitation, that fear, that flinch? Over time it becomes familiar.

Slowly, you realize it’s just a big monster in your closet. Big, scary, and all in your imagination. You’re bigger than it. You’re better than it. And you’ve already beaten it. It has nothing on you. Cold Shower Therapy makes you invincible.

You realize that if you jump in, sometimes the first sixty seconds of your project/goal/milestone will absolutely suck (usually they really will), but after that, you move on, dominate, and grow stronger.

And absolutely nothing can stop you. You’re invincible.

How To Use Cold Shower Therapy

What is this form of modern torture good for? We have hot water for a reason! I use it to get stuff done. I pick one thing that I’m going to do for thirty days and I do it. I’ve done this two or three times now and I always end up better for doing it. This is how I frame it.

I’m tired of writing, so let’s do this.

Cold showers. Every day for the month of April. Pick one impossible thing. Do it and finish it.

Deal with your fear this weekend. It’s time to put up or shut up. Do something impossible or go home. Give CST a try.

(Let me know what you’re planning on doing in the comments below.)

What Does Cold Shower Therapy Actually Do?