You are here: Home / Adventures / How To Run Across Liechtenstein

After my last ultra marathon in South Africa, I knew I had to finally come home…eventually.

After getting rid of my apartment in San Diego last summer, I’ve been on the road for almost a full 12 months and am ready to be stateside for a few conferences and other events this summer.

However, the flight from South Africa to the US is not a short one by any means and doing some 36 hours to get back in one shot isn’t that much fun – no matter who you’re flying.

After meeting up with some friends in Austria, Italy and Switzerland, I found myself in Munich with some time to kill.

After looking at a map, I found a small little country I had heard of, but never located – Liechtenstein.

Turns out, it’s a small country double-landlocked between Switzerland, and Austria – that’s mostly farmland with a few hills and cities surrounded by mountains – and i’ts only a dozen or so miles long.

I said when I finished the Cape Town race that I’d be DONE with running for a while, but apparently my head didn’t get the memo because the first thing I thought as soon as I heard it was less than 20 miles long was 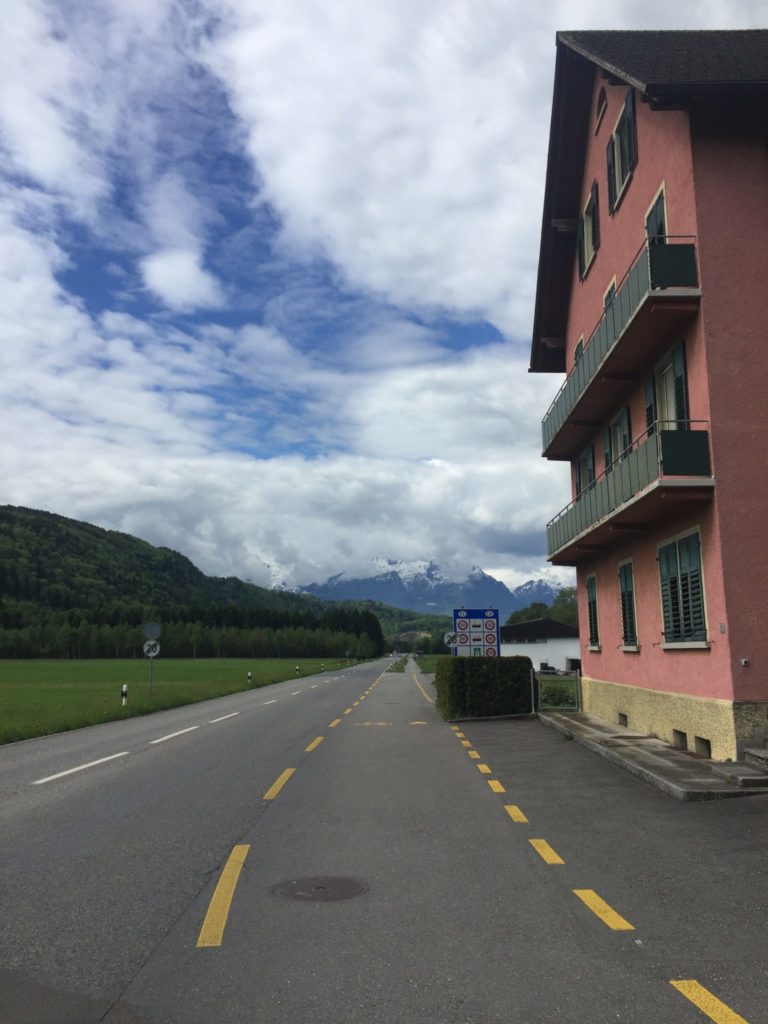 So, I hopped on the next train to Liechtenstein and decided to make it happen.

I booked my hotel in Ruggell, the north part of the country because I wanted to be near the border so I could jog to it early the next day.

Unfortunately, as I found out when I showed up on a Sunday afternoon, this is the industrial area and only busy on the weekdays.

When I showed up, it was like a ghost town. Imagine a small town where people mind their own business and there’s not a lot going on. That’s Liechtenstein. Then imagine you’re in the one are of town that only people go to work in. That’s Ruggell. Then imagine a quiet day in that area of town when everyone is relaxing at home, and there’s only one hotel in town that’s only used by business travelers.

That’s where I was.

When I showed up, the hotel didn’t even have reception there. Just an ATM-looking machine that gave me my room key. Seriously.

It was dead silent, no lights, no AC background noise. No elevator music. Nothing

Ah well, I’m here to run the country, so whatever works right?

I woke up the next day to a bit more hustle + bustle. I asked for a late checkout, but was told that they couldn’t because the hotel was “fully booked”!

Alright Liechtenstein – I see you.

I walked 4k to the border of Austria and crossed over, taking the obligatory photo before I started to run.I got off to a good start thanks to the 56km of paved paths & bike lanes throughout the country – nice work.

About 5k into the run, I realized my legs were trash. I’ve been running hard lately and haven’t been recovering very well. Running 4 ultras in 6 weeks and 5 in 3 months all while traveling over 7 continents means I’ve left a lot of the table as far as recovery, sleeping and a general lack of care for the human body.

HEY – JOEL – MAYBE YOU SHOULD USE THIS MOVEMENT & MOBILITY APP I CREATED TO HELP YOU MAKE IT EASY TO RECOVER? 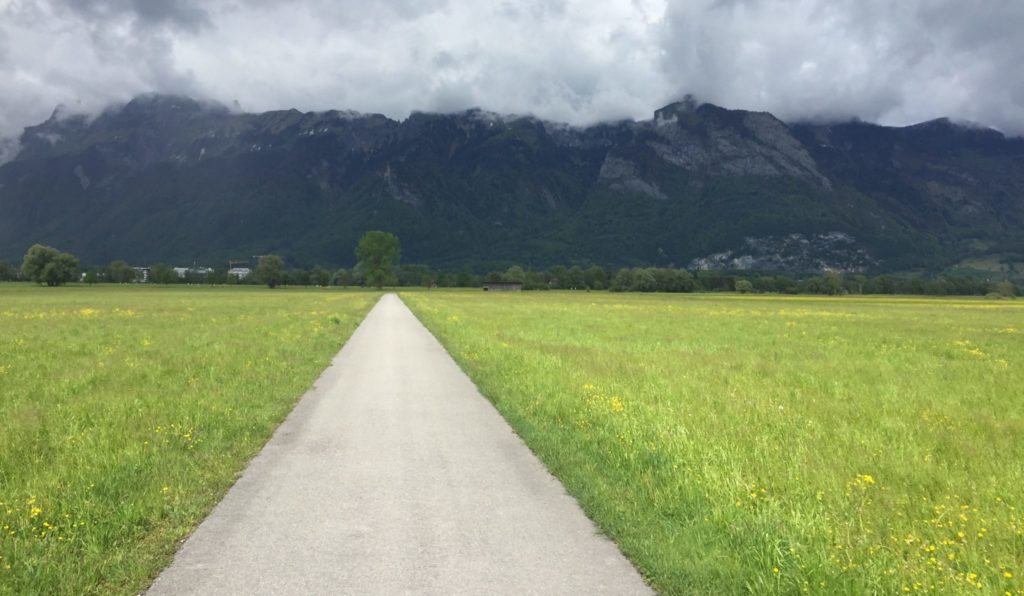 Liechtenstein is long enough that’s both very small and longer than you think. For some reason, I had in my mind that the run was 18k – some 11 miles or so – easily doable – even with my junk legs at this point.

Somehow, whatever route I ended up on, took me closer to 25km or 16 miles.

Still doable, but not quite as easy of a jog that I was hoping for.

I got into the main town of Vaduz and slowed down to get through the traffic, the crowds of tourists and enjoy the view of the castle on the hill.

Once I got out of town, it was about another 5 miles to go to the border.

I took my time and tried to enjoy the view. one of the things that I’ve gotten out of ultras is that sometimes you just end up in places where – despite all the things going on – PRs, etc – if you don’t take the time to look around and enjoy wherever you are (and you can get to some crazy places), you’re missing out on the whole point.

While Liechtenstein doesn’t have a lot of scenery IN the country, the surrounding mountains of Switzerland and Austria are beautiful and you get views of random castles in Liechtenstein. 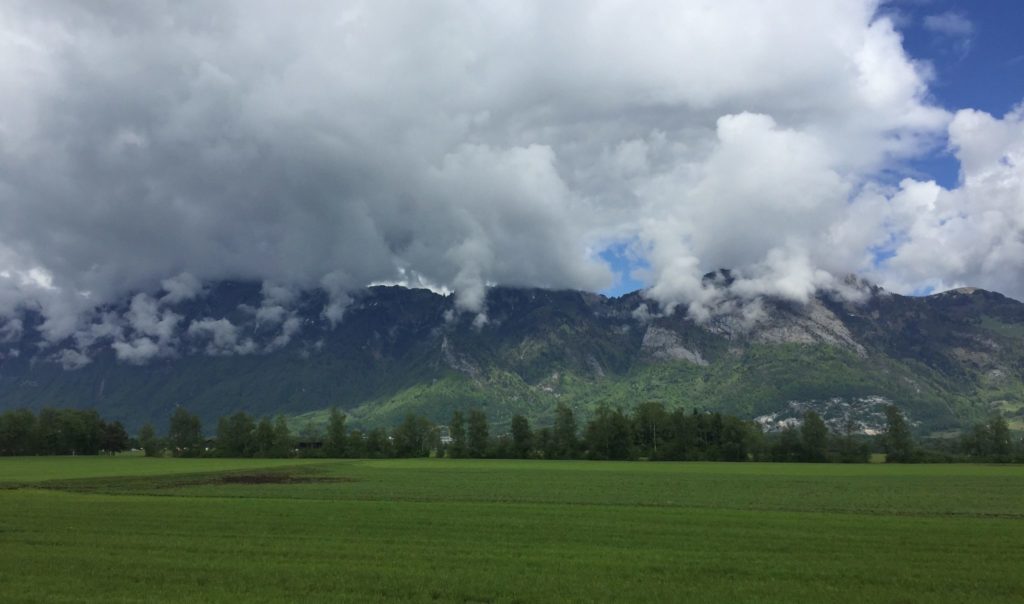 As I got to the end of the run, it was much less dramatic than I thought.

Unlike on the Austrian side, there is no border, no guards or anything really telling you it’s the end of the country – just a bunch of flags on either side of an invisible line.

I stood in the road and blocked traffic to make sure I got a photo of the accomplishment – something you may or may not be legally allowed to do if you cross any country on foot (it’s a blurry law and we’re still waiting on confirmation, but I’m pretty sure it’s allowed).

There's a little known international law that states that if you run the length of any country, you earn the right to block traffic and stand in the middle of the road trying to get a decent photo of the "finish" line at the country's border. . Another little known fact: it takes you exactly the same amount of time to run the length of Liechtenstein as it does to spell the name of the country correctly on the first try. . Note: Neither of those are actually true, but I did run all of Liechtenstein ?? today and it take me several hours and dozens of attempts to spell "Liechtenstein" correctly. (Hint: Don't forget the first "e"). . #boom #pushyourlimits #dosomethingimpossible #getafterit #rogerthat #wedohardstuff #dohardstuff #exceptspelling #liechtenstein #vaduz

What Makes The Better Story?

So why bother running across Liechtenstein? Well, it comes down to the one thing I aways try to do. Pick the option that makes a better story.

Sure, I could just rock up to Liechtenstein for an hour, look at a castle and leave. But everyone does that. And I’d probably forget about it a few weeks later.

But running across Liechtenstein? I’ll remember that forever.

So, even if it sucks (especially when it sucks), pick the option that makes a better story.

Since writing this, I found myself in Monaco, one of the 5 countries in the world smaller than Liechtenstein. My legs were still trash, but I couldn’t NOT not run it. So, true to form, I threw on my backpack and knocked out a short ruck across another country.

Ran across my second country in a week. This time: Monaco! . My legs are absolute trash right now due to the ultras and the travel as of late, but Monaco is the 2nd smallest country in the world and I can't NOT run it, right? That's my logic and I'm sticking to it. . Story coming up later on the blog ?? https://impossiblehq.com / Meanwhile, you can get the BTS in the insta story ?? . Now excuse me while I do ALL OF THE MOBILITY WORK and rehab my legs with @movewellapp while keeping the swear words to a minimum. #ihatefoamrollers . #pushyourlimits #dosomethingimpossible #getafterit #dohardstuff #wedohardstuff #impossible #monaco #montecarlo

Maybe this is gonna be a thing? 2/193 in one week. #boom #pushyourlimits #dosomethingimpossible